Why must you be lame Pony?! He walked out of his stall dead lame tonight. BO said he wasn't lame going out this morning. Alanna and I thought maybe an abscess (still hoping!) but if it doesnt get better very soon I will have the vet out.

He was a little funny on Monday but he felt fine when I was riding him and since he was just sore on the rocks I figured it was from our trail ride the day before and it was just a stone bruise. Now I feel bad because we even jumped a little. I went back out on Monday night to trot him and he trotted out fine in the arena? Who knows. He has his happy Pony self and was begging for carrots and happy to see me which is good! His legs feel fine (one time when it would be nice if he didnt have such hairy legs so I could actually see them!) and he didnt react to anything so there is hope its nothing bad. He got bute in his grain and is staying inside tomorrow so I can check him in the morning. Poor Pony! 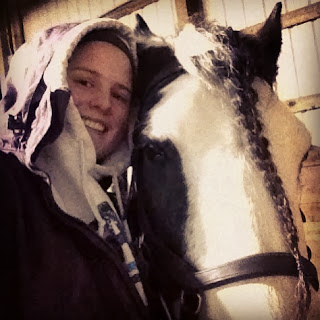 Sorry I have been so absent the last little bit. We had a very "blah" week. Everything is getting much harder and we are finally starting to hit some brick walls in our work which we are not used to. Up until this point we have kind of skimmed right along with no issues so this whole yucky feeling work is new to us. I feel really spoiled saying that, but its totally true! We definitely are getting some really nice work still, but definitely have some frustrating parts. We had a hard but helpful lesson but the day after that had an awful super frustrating ride so I decided to step back and have some fun easy rides along with a trail ride with Alanna before heading back to work. I feel like in a lesson I can work through a lot when Mary is helping me but on my own its a whole new ball game. We are supposed to have another lesson on Monday but its not looking to promising.

On a happy note... Tolo is officially sold! He new owner loves him and he seems to be really happy there. You know what that means? SHOPPING TIME! Pony needs some new stuff :)
Posted by Unknown at 7:20 PM