Thank God that Mystics funkiness was short lived and he now seems back to normal. I am sure he just tweaked something while doing something he doesnt normally do. After all he is still a fat drafty pony! 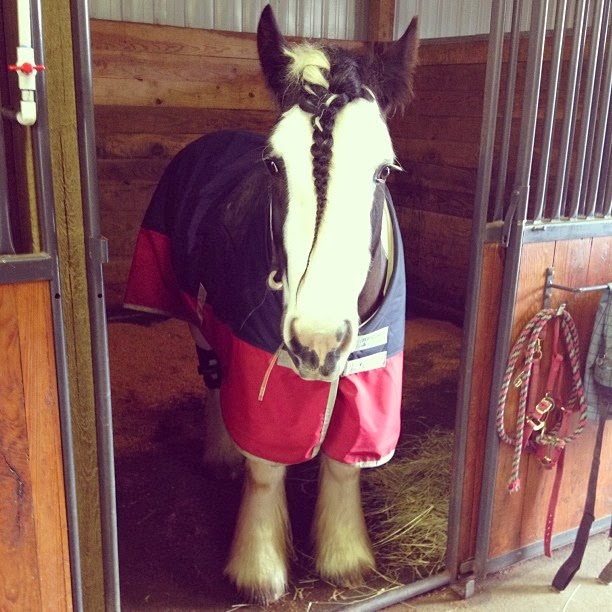 He got spoiled for a few days with some lineament rubbed on his hind legs, his Back on Track hock boots, and tucked in his blanket in his stall with a big pile of hay. I got him out and walked him each day and threw him on the lunge line to see how he looked. He was not ever super obviously off, which made it really hard, but last night I got some new eyes and we both agreed he looked totally fine. He went out in a small pasture by him self today and when I came out to ride he felt great! We just kept it short and did a lot of walking to warm up/cool down but I think he is back to normal. SO thankful! I still think I will have his new acupuncturist out to see him as it cant hurt anything and I feel much better about acupuncture vs chiropractic work at this point.

I also got my new full seat breaches yesterday so I took them for a spin tonight! I have never ridden in full seats before and I even got the sit tights which are super sticky. I mean if you want your butt stuck in the saddle these are for you. I was not a fan when I first put them on and tried to get on my horse and promptly got stuck with my leg partially over the saddle but then they got stuck and Mystic started walking away and I quickly hit the dirt HA! Luckily I was in the arena alone, it was pretty embarrassing! Once I got riding they felt much better and I really liked them. I think after a few more rides they will be perfect! Now just waiting on my tall boots to arrive later this week :)