Day 2 of the clinic actually happened on Sunday for me so the Pony had a nice relaxing day if just walking on Saturday so he could save his energy for another lesson. I was super pleased with how he felt right off the bat. More sitting power, bigger steps, bouncier and more adjustable gaits, and the list continues. Again, we went right to the canter. This lesson she changed up how she wanted me to set him up for a change. The previous ride we had a little all out battle just getting him hotter off my leg into the change and he got very strong. This lesson she had me take him down the wall in a shoulder in for the opposite direction we were traveling. So as we were tracking right we went down the wall in a left shoulder in with left positioning thinking about keeping his hind legs close together (aka maintaining the collection) and wouldn't you know it he popped in a clean change first time! We switched directions and did the same thing tracking left and got the same result. On that note we ended our work on the changes for the day! JW mentioned that if he comes out at home like that, and gives me two clean changes right away, to walk him out and put him away even if it's in the first 15 minutes of riding. 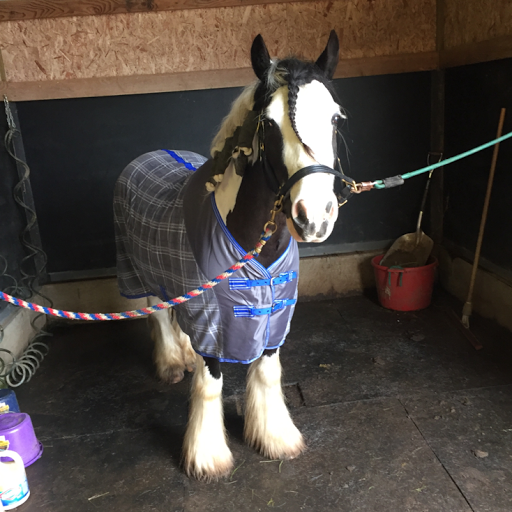 Next up we built on the beginnings of our canter pirouettes. On Friday we had done some very larg partial turns but Sunday we got much tighter and full turns. We started out by taking him from haunches in to shoulder in at the canter making sure that I could put him wherever I wanted to. JW made it clear that I should test everything in the canter to make sure I can put his body wherever I want. Can I make him bend right/left? Haunches in? Haunches out? Shoulder in? Faster/slower, etc because if I can do all of those things then th pirouette should have no probelm. Tracking right he likes to pop his left shoulder out so she had me being him into it in a counter bend which helped a lot. Another key to them is that I want to use my outside rein to help turn his shoulders not just the outside leg. JW mentioned that many people over ride the outside leg (I majorly used to in our wal pirouettes) and get a falling in because what is really needed is inside leg and outside rein guiding the shoulders around. We actually got some full 360 turns in of a 4th level size pirouette.  She told me to school then just like that for the next 4-5 months and also gave me a square exercise to do with it. I have actually done a bit of the square one but not much. Basically you ride a square in the middle of the arena by doing 1/4 turns of a pirouette at each corner. Seems simple but it is amazingly difficult to maintain the canter, get the turn, and keep them straight down the next side.

All video is from day 1. Unfortunately I didn't get any video from day 2 as I really think we improved some things. I uploaded the full versions of the videos so you guys get to see the good, the bad, the ugly, and the rare "holy crap I have a dressage horse" moments 😁

After all the canter work we moved back to some trot work. I requested that we did a little bit more of the shoulder in and half pass work from the previous lesson just so I could really get it down. We made progress in the changes of direction in the half pass but I really need to school the half pass to opposite shoulder in exercise so I can confidently nail it much more often. Right now it is quite wiggly and takes me a bit to establish.

We had a little bit of time left and I left it up to her as to what to work on and she suggested we start some piaffe work. Ummm.... okay! He gets the basic idea from the half step work so it wasn't starting from scratch. She noticed that he works best when she doesn't touch him with the whip but instead just waves it beside him. We got a couple of baby, baby forward steps (more passagey) which felt super cool! Her biggest emphasis was that I need to be very clear with my legs that they got far back for piaffe and I shove them forward into the walk so that there is nothing to be left for interpretation.
On that note we ended with a very tired pony (and rider!). We get to follow it up this weekend with a lesson with our regular dressage trainer.
Posted by Unknown at 9:40 PM