One of those lessons

Bentley and I had one of those lessons where you finish and just apologize that the trainer had to witness it 😂 I showed up to the barn to get ready and got a message from the mediums (I can the teenage barn rats this) that I was jumping outside. Let's rewind a minute. It's our first jump lesson (he has been over tiny cross rails twice), first time riding in the outdoor in the dark, and he basically had a non existent ride the day before due to no fault of this own. This will be fun! 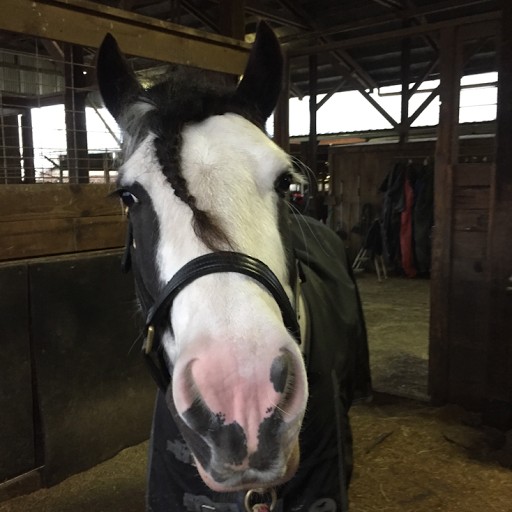 Pony want to make sure he is not forgotten!
I hopped on in the indoor and was riding a fire breathing dragon from the get go! He was amped. We headed outside and the first thing I said was "He is psycho tonight, good luck!". The first 30 minutes was spent in a trot that if you atattched needles to the bottom of his hooves he could nicely sew anything together. He was tense and paying attention to literally everything except for me. Once he settled slightly and started to sort of figure out the poles we moved to the canter where things were just as exciting but by now we were a little more relaxed (I use that term lightly). After cantering some poles a few times quite nicely she put up on a cross rail that he just stepped over like it was a pole on the ground. Once in the canter he did  his best impression of a demolition derby and scattered the cross rail across the arena. The good news? At least he is a smarty pants and picked him his legs next time and actually jumped it very nicely! We then moved on to a small vertical with some flowers under neath. He came in a little wiggly but I closed my legs and he popped right over. Same thing with the "oxer" cross rail! And then the drama returned... he had been through the bounce of two cross rails a couple of times and was figuring it out when he decided he was done. And I mean done! This legs planted in the ground and even my 39" inseam legs couldn't get that pony moving. He was throwing a major tantrum. He was tired, everyone had left him, and he was headed away from the barn. Bad news for him? I was ready to take on the challenge. 15 minutes later he was going through the bounce better then he was before and we called it a day. I put his back on track sheet on, sore no mored his legs, wrapped his legs (it took him a while to figure out he had to pick his legs up and not take out the jump haha), and told him he would be a better man for it the next day. 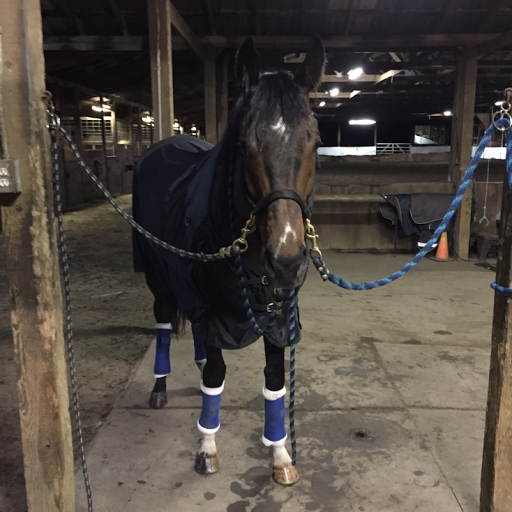 The trainer suggested that the next day I take him back into the outdoor and just do some pole work so he doesn't associate the outdoor arena or jumping as being bad. So we did. It was dark and rainy just like the night before. I set some poles up and wouldn't you know the dude was 150% better! More relaxed in his work and was paying attention to me. Let's hope that behavior continues for our lesson next week!
Posted by Unknown at 9:35 AM