my money that is! Horses are always taking it away from me! Whether it is my horse or the race horses I just cant seem to figure out how to hold on to any of it. My mom, brother, Alanna and I all went to Portland Meadows race track on Monday for my birthday (which is actually today but we had Monday off because of a holiday and the track only runs on Mondays and Wednesdays.. I know weird). Alanna had never been to any track and I had only been once several years back with my Pony Club. I mean for two girls who love OTTB and rescue them you would think that we would have gone a little more! Anyways, it was a ton of fun, even if I lost all the money I bet! Clearly the pretty ones who I would buy as re sell projects are not always the fastest. I mean really... So I went in with $20 and left with nothing :( I did get some back throughout the races but by the 10th I was drained. AND I actually picked the winner for that race too! My mom on the other hand put in $4 and come out with almost $17! My brother (who is totally not a horse dude but was more sick of them from being drug to the barn everyday while we were little) went in with $20 and came out with $4 or something, still better than me, and surprised us all by saying he definitely plans on going back!

Although Alanna and I were not the best at picking horses to win, show, or even place for that matter we were good at picking which horses we would take home! That game is always easy. One of the horse that I liked seemed to come up lame after the race and I so wanted to run down there and say I would take him dont send him away but I didnt... I figure I need to get an "in" at the track before I can do that. One this that surprised me was how many of the horses looked lame, especially in the hind end. Not only were they lame but they were also all on bute and lasix (spelling?), for the most part. I also figured out why most OTTB have such bad manners. They just drag their handlers around everywhere, even with a chain AND a bit! Obviously some were much calmer and easier to handle then others but still I was amazed on what they put up with.

As I was standing in the paddock area taking pictures and taking a look at the horses we had scoped out before (as to which we should bet on) one of the security guards came up to me and said "you have been here with a friend right?" I responded yes of course! He told me to follow him and Alanna and I got to stand RIGHT by the rail to watch one of the races with him! He explained a bunch of stuff to us on how things worked there and who all was involved. It was super cool! One sad thing he told was us that he was watching a horse being put down after an injury (a security guard has to be present for all euth.) and he told the owner "hey im really sorry to hear about your horse" and the owner just said " its ok he is just property not a pet" and walked away. That is SO sad to me. That would be the sad part about working there. I would get attached to the horses

I have almost always wanted to work on a race track. Before I grew super tall I wanted to be a jockey SO bad even though I knew I would be to tall. Now I just want to work there. I would love to just be a groom, getting the horses ready, wrapping their legs, hand walking them, etc. I think it would be an amazing experience. Alanna and I already have our plan set in place too: I get the "in" at the track and before you know it I got my own 'rescue' started from all the trainers that I talk to. Then Alanna, obviously, gets first rights to any of them (especially a bay gelding with lots and lots of chrome!) as her next horse. Or when we find a nicely put together mare she could breed the mare to Cardi (a Welsh Cob dressage stallion) and get a gorgeous baby! Someday... hopefully! 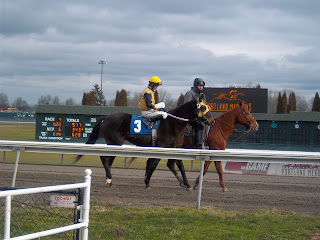 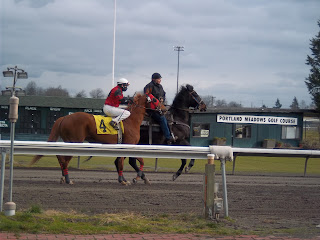 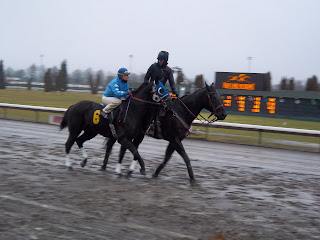