On Sunday we left bright and early to load up both Roz and Mystic to head on up to Lake Oswego for our first eventing derby! Mystic and I just entered trot a trail division since it was only his 5th time jumping ever. I wasnt really sure how he would do over fences because even though they were only little cross rails he hasnt had much experience at all and they had flowers around them and all. There was no need to worry at all because he just trotted right over all of them like a seasoned star! He did knock the very last fence. But im sorry.... who in the world puts 18 fences in a trot a trail class?!?! He just got tired and decided that last fence didnt really need to be there and he was just helping the next horses out :) We were in second after dressage with a score of 33 so I thought for sure we were at least 3rd place in the end which was ok with me since he jumped every question I asked and as a perfect pony over all!! Surprisingly it turned out that the 1st place person had time faults (a lot!) and everyone else also had jump faults so we ended up winning the class!! He won a pretty blue ribbon and a pretty white LOH saddle pad :) what a good good pony! 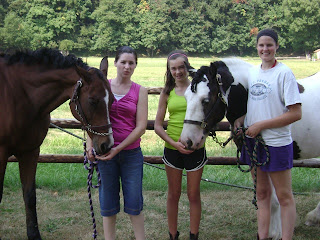 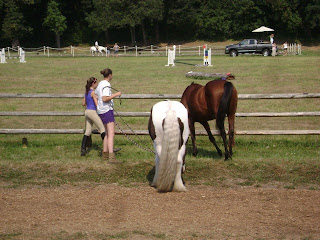 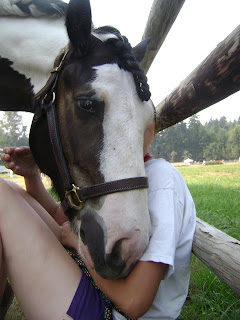 Tonight we also had a super duper good lesson and I am SO happy to hear that we have made progress since our last lesson. I have kind of had the feeling that I really cant get what I want out of him with Mary there babysitting me along telling me what to do and such. So it was nice to hear that she thinks we made obvious progress since last lesson. We are nipping his "I am going to go behind the bit a little so I dont really have to work that hard" habit in the butt right now. Tonight we focused on really getting him to use his hind end and sit down on it to push forward and get a more upward moving trot. He responded very well to the exercises we worked on and Mary also gave me some homework to do with him every ride. I am very excited to see where we are at come next year now that we have all winter to get to work instead of a show or outing every weekend like we are doing now!
Posted by Unknown at 10:20 PM