I did it. Tolo officially looks like a polo pony! After getting him back with a western pony mane (yucky, that was the first thing to go) I started pulling it. Then gave up because it was taking FOREVER. Then I cut it and pulled it more which helped some but still wasnt working for me so I did the worst thing... I shaved the under side of his mane. Since then the shaved part has been growing and his mane has just been wild. Its not like he will be going to any shows soon so tonight I took the leap and just shaved it all off. He actually looks much cuter than I thought he would!


After working at a barn this morning before being at work at 8 and working till 5 45, then getting to the barn and finishing cleaning buckets I wasnt in for a 'real' ride. So naturally I hoped on bridleless and took him for a 20-30 minute walk! He hadnt been ridden since Friday (due to dog show over weekend) and he was great. I think the grazing muzzle is doing its job (but it is rubbing :/) as he is definitely losing weight! I think he is looking really good. Now just got to get him back on a regular working schedule. It has been so scattered this last week due to being called in to work almost daily, ruining all my plans for the day. Tomorrow he is going to be a dressage school and as long as I dont get pulled into work early on Thursday I plan to jump him. 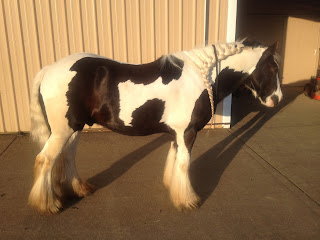 I found a Vespucci figure 8 bridle (brand new) online and am really hoping to get it for him! It has been up for sale for awhile when I had seen it before it was listed at $225. Then I found it on Ebay starting at $150 so I responded to the selling on FB (where I first saw it). If it doesnt sell on Ebay I may get a super great deal on a super nice bridle and it will look super cute on my pony (a lot of supers but thats how excited I am!!)! I am seriously crossing my fingers. I have looked and looked at this bridle and I want it. He will look SOOOOO cute in a figure 8! And it will be just in time for our jumper show next month :)