Our chariot arrived at the barn just after 8 this morning and we were on the road to Inavale in no time at all to do our 'warm up' in the show arena (you crazy weird hunter jumper people!). It was so strange to me to be able to jump all the fences before my class, it feels like cheating! Then after being able to do it I think maybe they should let us do it for BN eventing ;) It definitely helped Mystic to get in there and see the fences first. He really is super green over stadium fences (and basically has never done full course work besides a handful of fences thrown together while jumping in our field in the summer) so he looked pretty good at some of the more dressed up fences. After stopping at our very first cross rail (my fault, short bad warm up and didnt ride him well to it) he was game for all the other fences and felt amazing! We kept the warm up short and sweet as I didnt want to wear him out before his classes. Annoying thing about these kind of shows? You have to wait all.day.long. There are no ride times or even class times so you just wait and wait. It started at 10 and we didnt ride till at least 1 if not later (we were in class 6). Needless to say, the pony enjoyed his muzzle free grazing time :)

Since he had been hanging out for awhile I took him in the indoor and did a short re warm up before heading into our first class (2'-2'3"). He was great! Cruised around the whole course and jump off like he has done it many times before. I was so happy with him! He is definitely a green bean and is so willing and game for most things that he isn't hard to ride at all. We had a nice clear and pleasant ride. No rushing, no throwing of head, nothing but a solid well behaved pony! Not that he does any of that anyways but it was pretty much a standard for the whole morning classes. Super ugly and gross. As much as I love winning I am NOT willing to whip and spur my horse around a jumper course at mach 10 as its head is straight in the air and is hanging its knees because its getting an awful ride and almost falling on its face because it is so unbalanced. Of course there were several horse/rider pairs that fit that description perfectly, and although they won some classes they couldn't hold their own in a hunter class to save their lives. Im more of a middle of the road kinda ride. Forward yet balanced and adjustable all day long for me! So we took our 3rd place in our first class knowing we had an awesome first experience!

Our next class was a 2'3-2'6 class that was basically all maxed out with the addition of more dressed up fences and a combination line. We had one stop at a brush oxer, that I totally could have prevented if I rode him stronger, but he popped right over it the second time. I knew he would give the combination line a good look as the fences were bigger and he hasn't done one since last year and although he looked he was totally game and went through it really nicely! He finished the course great and despite our one stop it was nice to know that I can get him over fences he might not originally think he could/should jump. Out of 11 riders there was only 2 clear rounds in this class (mostly refusals at the same fence!). I was very happy to see that although he stopped at that one fence, stopped in front of it didnt even run out, he remained calm and never got all worked up over it at all. He just needed a little more support the first time and I think he would have jumped it. Once again left the ring feeling great about how our day was going!

Final class was the 2'3-2'6 gamblers choice. My goal for this was to get him over that brush fence without issues and get him through the combination line again. He was tired by now and ready to be done yet he still gave me his all! He was great and had no issues what so ever as far as questioning me about any fences. We got some short spot but he got us out of it all. He did pull the last rail but I know I stopped riding him well as I was just so pleased with how he did today! He even ended up winning his class :) We got pictures all the other goes but here is the video of the tired pony doing his last round: https://www.youtube.com/watch?v=Ntf5vQPjtME

I love seeing how he gets almost all his changes by himself! I really just stay out of him way and he does them by himself. I havent ever trained them because I have been waiting to introduce them in our dressage lessons. So besides playing aground with them a little we havent actually schooled them.

SUPER cute pictures on their way soon. I got to preview them on Alannas camera on the way home. One word: adorable! Here are a couple I have already :) 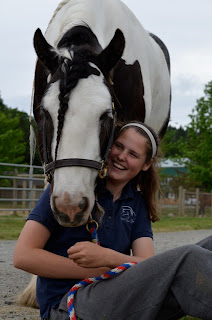 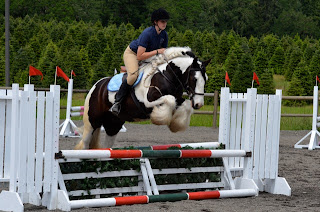