Pony got his vaccines, his teeth floated, and his tear ducts flushed today and is now ready to roll! He has some points and hooks but overall was better then last years float. He has retained a baby tooth (aka: his snaggle tooth haha!) that we loosened up last time he got done to see if it would then fall out on its own and it hasn't. It doesnt bother him at all and is in solid so we decided to leave it. We have no way of knowing if he even has a permanent tooth there unless we xray it. Since it isnt bothering him and is in nice and tight we left it. If it is still there next time she comes out to do his teeth we might xray it and talk about pulling it out. He also has extra gum tissue around one of his canines. That will also be removed next time if needed. She said it could be just from the tooth coming in and it could go away on its own (its only on one side). It also isnt bothering him, just something to watch because it could store gross stuff in it. Good news is his mouth/jaw is completely fine after his fun adventure of trying to eat his blanket bar a year and a half ago (it hasnt bothered him but I just asked to see if it was like normal)!

I was also told that despite putting on my big girl mean mommy pants on he is still too fat. Poor pony! Im telling you, he has seriously mastered his grazing muzzle! One tip she told me was to soak his (tiny little flake) of dinner hay. It will help bulk it up, filling him up more, and it also takes calories out of it. So we are going to try that. He definitely carries more of his fat towards the front as she was saying how he doesnt have the creasy fat butt and fat pocket over his tail yet he has a fat pocket by each shoulder. So poor, poor pony goes on yet another diet. He is going to think there is a hay shortage up in this place ;) 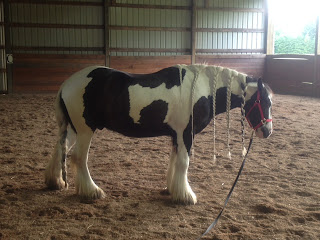 He isnt that fat!! This is him being super thrilled about getting a light lunge tonight. Had his appt this morning and she wanted me to give him a light lunge tonight just to get him moving a little (since we all know he doesn't do it on his own in his pasture) to help prevent him from being sore. 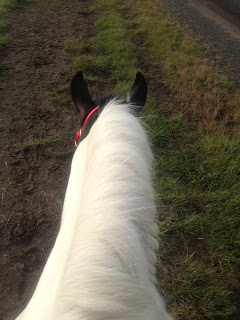 He did enjoy our nice short walk down the road though!
It is inane how much his hair grows. The first picture is of his mane today and the second is one of it on September 15th. You can see how uneven his braids were because he was grazing the top two off some. Since I started zip tying them up they are evening out really nicely! You can especially tell in pictures of his mane down. Pictures dont do it justice, it is crazy! Amazes me everytime I let it down!
Posted by Unknown at 8:43 PM