When you know its time...

Due to a busy June schedule and then having to get back to work with Mystic we havent had a lesson since mid May :( Now that we are back on a regular schedule, and have been for a few weeks, I signed up for a lesson. We had been doing so good prior to our two dressage shows and were lessoning at least once a month and were even on a every other week schedule and we were having great rides. I can always tell when we havent had one in awhile and we start to have sub par rides. Sadly our trainer is not available for lessons next week (she travels to our barn every Monday generally) so we will just have to wait two weeks. What is one more at this point?! It is amazing what a consistent, even if it is just one a month, lessons can do for Mystic and I. We rarely have not great rides and I know that when we start having them, especially more than once, I need some help! I am definitely looking forward to getting back into the swing of things with our trainer!

Mylo has continued to do great! He has gotten to just hang out the last few days. He is still doing much better during feeding time and although it pains him greatly he has been on much better behavior for it. His ground work is also coming along and he trots in hand super easily. He is great about stopping when I stop and is pretty responsive to my body language as far as stopping/backing up and does it all without any pressure on the lead. Although standing still is not his favorite thing he is also getting better at that and if he tries taking a step forward he moves it right back if I walk towards him. So far I am super impressed with him and how much he has picked up on since he got here. Although I believe he would be much further along if he had, had consistent handling from a baby on I dont think he is too bad for a baby! 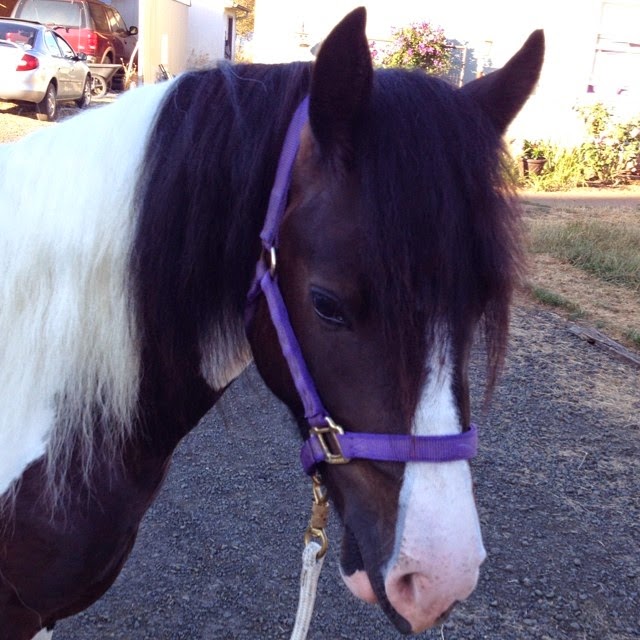 Even though I have a full year until I even think about starting him under saddle I have begun thinking about the route I want to take with him. I do not think he is going to be big enough for me to ride consistently and I am not even sure that I feel good about starting him under saddle myself. Obviously if he shoots up that will be a different story, and I would love it, but at this point I dont know if he will break 14 hh. I will do all his ground work in prep for riding such as lunging, long lining, and ground driving but from there I have a few thoughts as to where to go next. I could get some solid first rides on him and get him going w/t/c decently then find someone small to send him to for a little bit to continue his dressage education (and then maybe even find someone to start him over fences as a 4 year old). I have also thought about finding a talented young rider to bring him along and campaign him which could really be a great situation should I find the right person. He has a great personality for a kid and as he grows up/matures I think he could be a great kids pony. I mean, how adorable would he be packing a kid around the xc course?! Luckily I have over a year to figure it all out but it isnt a bad idea to start thinking about what I want to do with him and his long term future. If anyone knows of any good pony riders/trainer out there let me know :) Its never too early to start planning for your kids college!