The hard part about rescues

It always happens. Every single horse I have rescued, no fail, has had me question re homing them after some weight and training. My first, Tolo, was the worst. He was supposed to be a summer project then re sale. 4 years later he is now in his new home. I love that horse so much and still miss him, some days worse then others.

The one after Tolo (well I still had him) was Chia. An ADORABLE small draft mare. About 15.2 hands tall. We think she was a PMU mare because she wasnt halter broke and seemed to have been treated more as livestock then a pet. That changed quickly! She was one cool horse and is now enjoying her life being a trail horse.

Then came the one that almost made me give up horse rescuing all together. Candy Cane. She was an 11 year old off the track tb mare that was super skinny when she was pulled from feed lot. She seemed good in beginning but as she gained weight we noticed severe lameness issues and ended up euthanizing her because she didnt have one good leg to stand on. After that happened a lot of people from the group I got her through jumped down my throat about how horrible of a person I was and all so I even stopped visiting the rescues sights (which was a daily thing for me) and focused on the horse I had. It was a super hard time for me especially since it was not an easy decision to put her down. 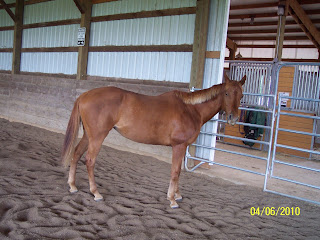 Although I havent gotten any directly off the feed lot since then I did get another one like I always knew I would end up doing. She was headed to the same place I just happened to get her right before she left for the feed lot. And that would be Skies the Plan, the Tb mare I still have. The point is... I have cried over every single one of them. From selling Chia, to putting Candy down, to all the adventures with Tolo each one has a place in my heart and always will. There is something about saving a lost soul that doesnt deserve to be where they were put that you just have a special bond with them from the get go. 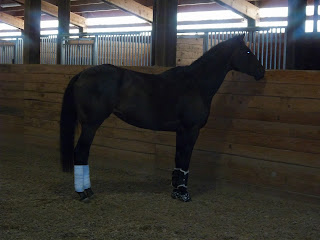 The more and more time I spend with Sky the more and more I think to myself... im going to end up keeping this horse. This is the horse I have needed throughout the years. A nice big, tall, athletic, tb. Now if she would only heal from this injury we might just see where it takes us. I have to say with everything I love about my Mystic pony the one thing I miss about the Tbs is the athleticism and the stamina. Wouldnt be nice to have my rock steady pony boy that will do low level eventing and some dressage and my Tb that will jump a little bigger and gallop a little faster to help fulfill all my need/wants?! We will see where we are at in a couple months... Those darn rescue horses. Cant you tell they are so terrible? After all there is a reason they ended up where they did right? Thats a joke. Rescues do and always will have a special place in my heart :)
Posted by Unknown at 9:44 PM