Stole this from a friend who stole it from someone else!

I saw this on facebook today and I couldn't help but repost.

A Gelding Owned By A Girl

She's begun dating a cowboy, so he joins us on our rides. And she says she'll be on my back when they play "Here Comes the Bride."

Her new guy's horse is a Leo Bar, a muscled speedy thing. But I lead the way on every trail, he knows that I am king.

At first glance he had his doubts, about ribbons and a tail in curl, but now he realizes who I am, A gelding owned by a girl.

They ought to have a special prize for horses cursed in this way. The whims that we put up with, the games they like to play.

We live our loyal lives alongside these girls who are our own. From lead lines and kiddie gymkhana, to barrel racing when they're grown.

But there's one thing about a girl that makes it all worthwhile, it's the fact that she'll always think you're grand, and that you have real style.

How did I end up as CEO? I never expected to become, such an important thing as this, the place where I was from.

An auction over six years ago, and a girl looking through the rail, saved me from a
packing plant, and braided these ribbons in my tail.

She had no idea where I came from, imagines I was a champion stud, still thinks I am from time to time, even when I'm covered in mud.

That's how I can put up with the giggles, and allow myself to bow so low, as to nicker when she brings me carrots, and to put up with what she doesn't know.

Next thing there'll be a young' un, moist-reared and pudgy-cheeked, and the old saddle will be stained, by the water they invariably leak.

So laugh if you like at this old nag, go ahead and stare, I'm a gelding owned by a girl, and I've learned not to care.

You try putting up with the doo-dads, take her ineptness if you can, but it would kill any cow pony. who has ever been owned by a man.

Yes I'm a part of a special breed, but I put up with a pearl, and the truth is I kinda like being a gelding owned by a girl. 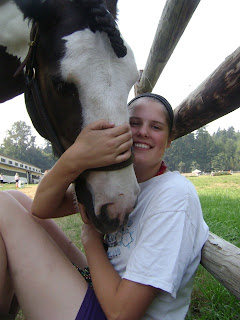