While Pony is out of commission I thought it would be fun to try this out along with many others!

1. Most influential person in your riding
I would have to say it is my mom. Although she isnt as involved in my riding now, as she was when I was dependent on her to drive me and such, she still comes to every show and is always willing to go out and do something with Pony should I need (which isnt often but its nice to know she will if I need!). She also played a HUGE role in me growing up riding and letting me keep the passion. She is a single mom and is a dog trainer so we dont have money and even when it would have been really easy for her to say we really shouldnt have horses she instead helped me get my first real job at 15 and the rest is history :)


2. Piece of tack you would splurge on
Nothing new here but I would buy Pony and I a custom jump saddle. We are both hard to fit and it would be amazing to have a 'perfect' saddle for us! Honestly I have never ridden in a super fancy saddle because I have never had one so I dont even know what I would get. That being said I am thankful that I learned to ride in a very basic non supporting saddle because I feel like now if I rode in a nice supportive one I would only be that much better of a rider!

3. Top 5 riding playlist
I LOVE music and love riding to it! Usually I just turn on our local country station. But I just picked up the new Florida Georgia Line cd that is really good and would be fun to ride to. Sadly Pony is not cooperating so we havent been able to ride to it. Instead he gets to listen to me sing while we hand walk.

4. Most important part of your barn
We are extremely lucky with our barn. Although there are many barns in Corvallis very, very few are nice and Pony worthy and ours happens to be the best in town. Daily turnout into pasture YEAR ROUND (unless it is really really nasty out), hot water wash rack, awesome accommodating BO, the fact that the BO works at OSU vet hospital, drama free (yes it really is for the most part), walking distance to trails, fields to ride in in the summer, etc! I could go on and on. But overall the fact that Pony is happy there!

5. 3 winter riding goals
This is all assuming Pony returns to work soon!
-Get a lesson every 2 weeks and continue to work hard between the lessons to show improvement. We are reaching a hard time in our training and the harder we work the faster we will get there!
-Continue to work on his conditioning
-Be ready to show 2nd 1 by Devonwood in the Spring (with the big boys!) 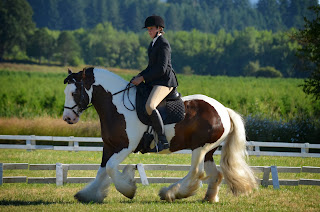 ETA: We had a snow day today! The best we have ever gotten (that I remember)! Because we so rarely get good powdery snow that sticks pretty much our whole city was outside playing in the snow! I went out and walked Pony in the snow and he loved it! He was a Fire Breathing Dragon Gypsy edition (still has nothing on a TB)! It was pretty cute actually. Since being on stall rest he also believes he is being severely deprived of food.
I walked him for about 35 minutes today, mostly because he was pretty excited and I know that being stuck in a 12 x 12 isnt all that exciting and it is definitely starting to drive him crazy. A sure sign of it is that he was jigging and spooking at the Fed Ex truck that drove by. Umm... what?!?! I cannot imagine having a 'normal' horse on stall rest if it is making Pony like this! Good news is that he is only very slightly off. I even took a video and texted it to Alanna just to make sure I am not going lame horse crazy and seeing a bunch of stuff. I hate to put off having a vet out if it is needed but I also dont want to have a vet out just to tell me what I already know (which seems to happen a lot with mild lamenesses). So after talking with Alanna I decided that I will give him 2 full weeks before having vet out. Not to mention since we are not used to this kind of snow everyone is in a panic and basically not leaving their houses so im not sure I could even the our vet out now (im sure if it were an emergency she would come but I would hate to have her out just for this right now).