16. One thing I would change about my horse
If you have ever ridden a drafty breed after riding sport horses such as TBs I think we could all agree that we would like them to have more stamina and speed. This is something I really need to spend more time working on this year prior to our events.

17. Your future with horses
Who knows? I definitely plan on having horses for ever and have bucket list items as to what I want to accomplish such as getting my bronze medal and going training level eventing. As far as this year I want to show 2nd level and qualify for regional championships (at least at 1st level). I have never competed at Devonwood and it has always been a dream of mine since I first watched there. It would also be really fun to qualify and compete in our areas eventing championships.

18. Worst show ever
As far as the one that I hated the most when when I took Tolo to Inavale and we had an awful dressage test (we basically cantered half of it and somehow managed to still get a 35 or something) then was having an awesome xc go when he decided he was in no way going to get in the water. 7 minutes later... he got in but we were already eliminated. We had 2 more fences left on course! He then went and jumped clear in stadium the next day too. We would have finished 3rd.

Another one that had much worse results as far as completion was a Pony Club eventing rally. It was nasty outside and he dumped me in dressage warm up (hopping, bucking, rearing, totally not him!) then went in and put in the best dressage score of the day (which looking back at it makes me cringe watching it!) after taking a romp around the intro xc course before we caught him. He then went and jumped really nicely around stadium. We had to go straight from stadium to xc, I was feeling good he warmed up good, get out on course and stops halfway over the first fence then wouldnt jump it. Why he decided half way over the tiny BN fence it was terrifying is beyond me. I had a video but I cant find it! He literally had both fronts over then backed up.


19. Favorite horse show venue
Although I have never competed, YET, I love Devonwood. It is seriously gorgeous. 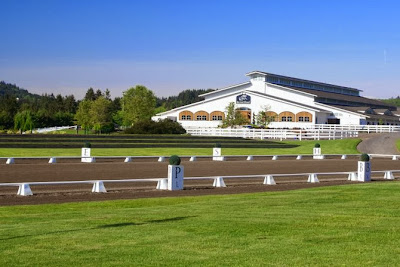 The arena you see is the big boy arena where do have FEI tests and the freestyles! They also have 2 more outdoor show areas, a huge warm up right next to a standard court warm up arena all outside! They also have a gorgeous indoor and a small indoor warm up. This place is seriously heaven.


20. Show day routine
Honestly I dont really have a set routine and it depends on the type of show. He is always bathed the day before. Day of I load the trailer, load the horse, and we are off! If its a dressage show I try for getting there about 40 minutes before test which allows for a 20-25 minute warm up. At an eventing derby it would be about the same but our dressage warm up would be more relaxed since the tests are just very basic walk/trot/canter tests and I want to save him for xc and stadium!
Posted by Unknown at 9:58 AM