I know its a little early but since we dont have anything planned for the rest of the year, and I have unexpected time today, I figured I would look back on what we have done in the last year. I definitely didnt get out as much as I hoped but thats what happens when you dont have a horse trailer any more :/ Thankfully I have a pretty freaking cool friend who has hauled our butts around (On a side note I cant wait to haul our adorable ponies out together!). Although we didnt get to any dressage shows (umm.. how did that happen?) I feel like we have still progressed really well and cant wait to get out next year. Heart of the Valley in the spring maybe?! Anyways here is a look back on 2013.

January-
I officially decided to enter Pony in the All Breed Challenge at the horse expo. It was something that I had never done and was totally out of our usual stuff and it would be an amazing experience for him! We began practicing our bridleless stuff more along with working on scary things such as tarps, pulling garbage bags, etc along with kicking his new ball!
We kept plugging along with our dressage work. This video was actually from December of 2012 but it gives you an idea of where we were at come the start of the new year! Both have a lot of walking in the beginning as I clearly hadnt figured out how to make a nice over view of my lesson instead of uploading the whole thing haha


February-
Pony did his very first 2nd level test with his Teacher Mary! As you can tell from our December video it was a very green test as he hadnt learned everything yet, in fact im pretty sure he had only done the counter canter loops a few days before when we realized they were in the test! Even with being very new to it all he still scored a 63 %. Go Pony!
https://www.youtube.com/watch?v=wS5t_Ql1_iU (the test doesnt start till like 3:30) 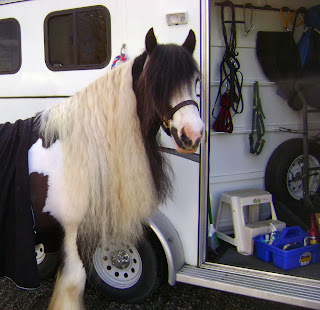 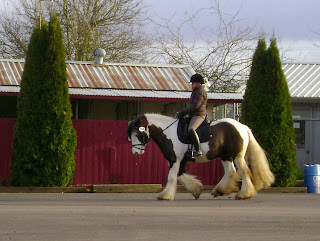 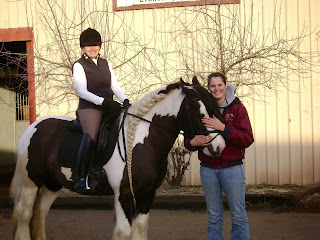 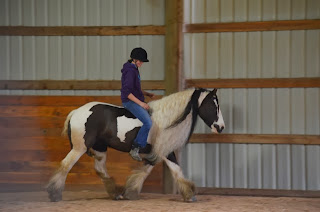 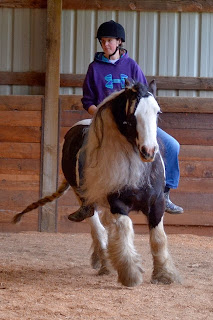 The All Breed Challenge! Pony was super good and we had a lot of fun. Although we didnt make it to do our fun freestyle (that would have kicked butt!) he did a lot of scary stuff that I didnt think he would do. We made it to the semi finals though and he did a lot of meet in greets throughout the day and was a huge hit! 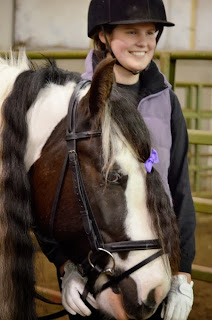 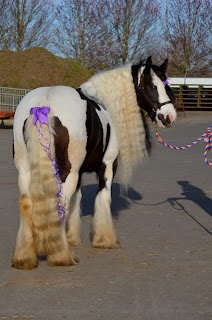 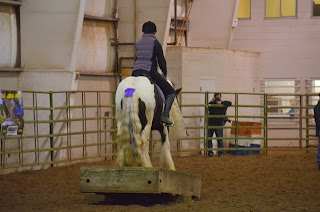 I also got Tolo back this month!

Was a pretty chill month for us. Pony started jumping again, Tolo continued to hang out and look pretty :) Here are some pictures of both from April!

May was a fun month! We went both XC schooling and had our first jumper show :) Both went awesome! We came home with a 1st and a 3rd. Not bad for a speed class (and some crazy rides). 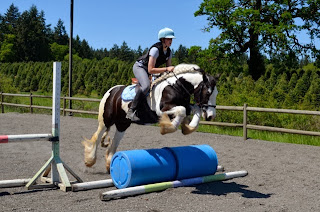 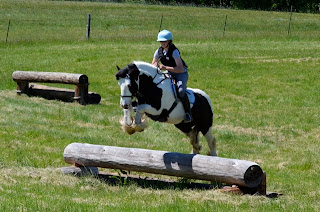 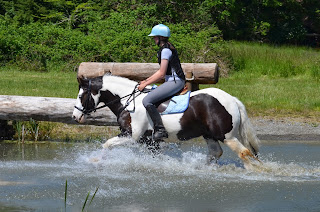 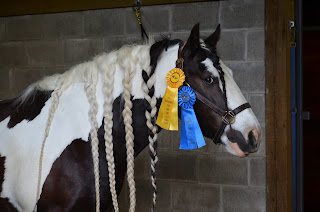 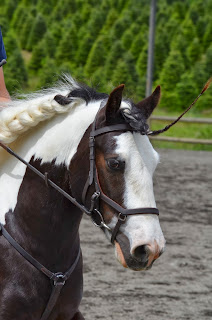 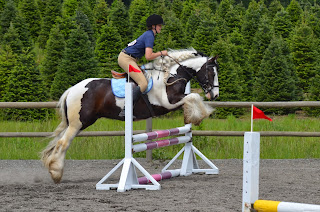 June-
Was probably my favorite month of the year  for us! We started off the month with our very first one day at BN and despite a yucky feeling dressage test we still scored a 32 and ended up in 1st place. He then went and jumped stadium like a pro! For some weird reason we got time faults but I think they miss calculated it as majority of the people did get them. He was a tired pony by xc but tore up the course and went clear to win our division :) 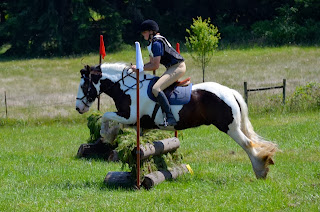 Next up was Inavale, our very first recognized 3 day! We had a great dressage test earning us a 30 and were tied for 1st! It was super hot and not only had we done dressage in the morning but we also had to go out and do xc in the middle of the afternoon. He was AWESOME! Started off slow but after fence 4 you could tell he all the sudden figured out what we were doing and was spot on for the rest of the course. Sadly I took a wrong turn up in the woods and got us major time penalties. I hate focusing on ifs, ands, and buts, but we really would have won our first event if it wasnt for me! Even though I knew I screwed us over I couldnt stop smiling coming through the finish line. I was SO proud of him! Of course in true Pony form he also went double clear in stadium and was one of the few in our division to do so. Sadly our 30 some time faults put us in 7th. A pretty purple ribbon it is! Bottom line is we found out Pony is going to be a name people remember at the BN level :)
https://www.youtube.com/watch?v=FVggb6pUlyU 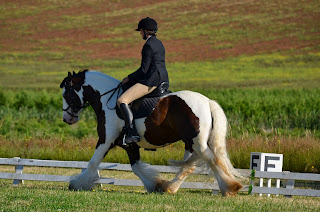 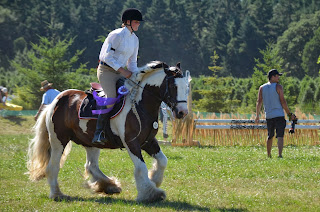 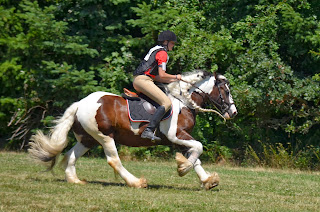 July-
Was kind of a more chill month. He got some time off after Inavale then had a super fun lesson!
https://www.youtube.com/watch?v=4KiLzsx-Ajs

He also gave a little pony ride to the cutest little girl around :) 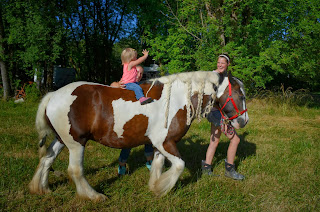 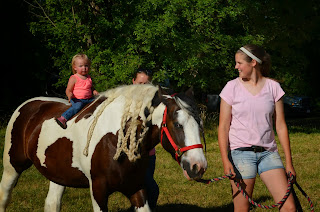 August-
This was the State Fair month! Although im not much for breed shows it is always fun to meet up with people who love the same breed. Pony was quite the hit! 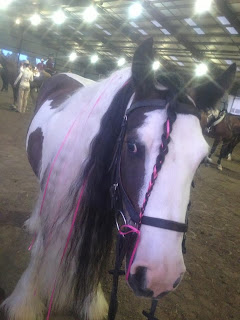 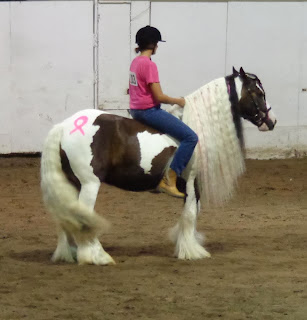 September-
Was yet another hang out month. I was gone in Nashville for a week, then school was starting up so we were transitioning our routines. Not much happened except our usual!

October-
Alanna, Alyssa, and I hit the beach with our boys! Alyssas mare was rehabbing so she rode Pony and I rode Tolo. Everyone was perfect and it was just what we all needed! 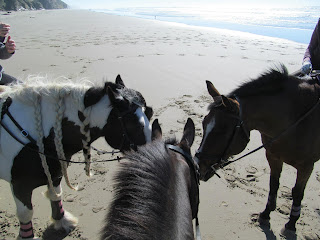 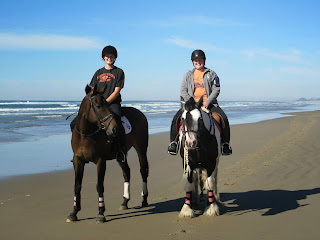 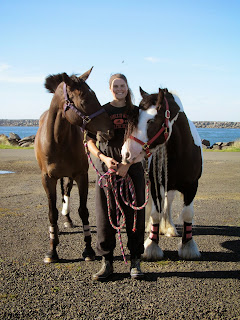 November-
Tolo went out on trial at the first of the month and they havent looked back since! I just got a text today saying how much she loves him and how lucky to feels to have met us. They also had their first ride with a trainer they clinic with and the trainer was super impressed with Tolo and said he is the nicest TB she has seen in a long time. I do miss the guy but am so happy he found a great home! 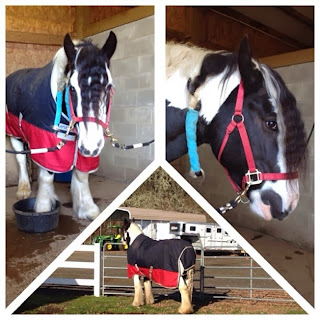 Pony went lame and has been out of commission all month so far. I got the okay to do some light work and the farrier is scheduled for tomorrow morning! Hopefully it all resolves soon.

It has been a great year but I am so looking forward to what 2014 has to bring us! Now that I have checked winning a cooler off my bucketlist its time to get that victory lap and a neck ribbon :)
Posted by Unknown at 11:44 AM