I have totally given up on posting, mostly due to time, the fact that we haven't really done much, and I haven't been super motivated due to some bad rides, but I really wanted to get these thoughts down from our weekend so I could look back on them!

Since my last post we went to a one day dressage show where we cleaned up some areas and totally botched others including getting our first 4 ever... Overall we still got a 64 % but I was definitely feeling frustrated with where we were at. Then I had a lesson scheduled in hopes of our trainer talking me off the edge but had to cancel due to crazy insane busy week I had trying to get Mylo moved home.

I was looking forward to this weekends clinic with Jessica Wisdom but I was also slightly worried that we would show up and make fools of ourselves at our own barn. In usual Pony fashion he came to play and we had an amazing weekend. It definitely inspired me to keep going and showed me that we have the potential to keep moving up. Day 1 we spent getting to know each other and really tuning Pony up to my aids. She really emphasized that I cannot be nagging him every step and that he needs to be held accountable for staying in front of my leg once I ask him. We did lots and lots of transitions from collected trot to extended trot and back to collected trot which kept him on my aids and waiting for his next que. We also did exercises like taking him from shoulder in to renver and overall just getting him more supple and easier to move off my leg. Sadly, I did not get video of this day so I have already started forgetting smaller details but I do know that I left that lesson feeling very good and already looking forward to the next day. I felt like we got some of the best trot work we have had and got some good insight on what I need to do to maximize our scores and some changes I need to make in every day riding. 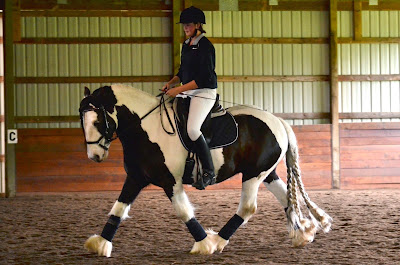 Day 2 ended up being better then I could have ever asked for! We were all well acquainted with each other from the day before so we went right to work. She started off by asking us to do a walk pirouette, you know those things we have never done before! Although we have done half turn on the haunches we haven't solidified them yet so naturally our first attempt was quite large and she had a nice laugh at me before telling me to ride my horse better ;) Each attempt got better and our last one ended with some great last steps. Luckily I did get some phone video this day so I could watch it! She spent some time really emphasizing how much we need to improve our walk. I tend to push him more forward into a bigger walk when I really need to get him more in a quicker more engaged walk. She actually stuck us on the wall and came out with a lunge whip to tap his hind legs which really helped, obviously, and we got the most amazing canter transition I have ever gotten from him coming directly out of it. She also mentioned that she thinks teaching him half steps will really help improve his walk. We added some half pass that she thought were definitely useable! She had us start the long side in shoulder in, turn that into renver about half way down the wall and then take the renver down the centerline into half pass. One thing I really need to be careful about is making sure his shoulders are leading. Half pass? Check. What next? Now she has us pick up the canter and do a 6 loop serpentine from the wall to the center line down the long side of the arena. After under riding the first 2 loops I got him regrouped and we ended with a great last few. Definitely not something I would have thought we could pull out but it will for sure be a new item on the "what to master next" list! 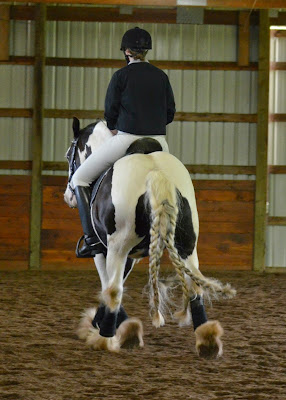 Now we are at the end of our lesson and she was checking in on how Pony was feeling and if I thought he had more gas in his tank and if so what did I want to end on. Honestly, I had no idea! We had already been doing stuff that we had never done before with success and I was very happy with all of it. I would have been happy stopping there! As I said I didn't know what else I wanted to work on she casually threw out the "has he been started on changes?" question. Yes he has but we haven't really worked much on them because although he gets what the question is I haven't been able to figure out how to ride them well enough to get clean ones in lessons so they have strictly been a 'lesson only' topic for the last while and we haven't worked on them much. She had us start counter cantering on a circle, another new for us, and worked on establishing a shoulder in while in the counter canter and really getting him off my inside leg since he just wanted to fall in the circle instead of maintaining his balance. Tracking left (he is on the right lead) was pretty hard for us and involved him swapping leads every few strides on his own before we got some good solid counter canter circles and called it on that before even asking for a change. Tracking right (on the left lead) was much easier pretty much from the get go. We worked on improving his counter canter on that circle until I could really feel that a good change was possible. All the sudden I felt him really want to change but from a really nice canter and two strides later we had done a 100% clean change! What a perfect stopping point, huh? Jessica even said that it was the perfect way to end the clinic weekend. 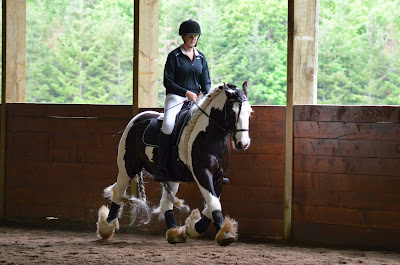 JW had some really encouraging things to say about Mystic which is always very nice to hear. She teaches some Gypsys at home and said that he had surprisingly good movement for one and made sure to remind me (not that I needed it) that I have one super nice horse. She thinks that he has the ability to go much further in dressage then I could ever imagine but also noted that her final parting words to me was that I really needed to work on his fitness. She told me some of what she does with Cardi which was helpful. Im really looking forward to her coming back and can't wait to show her all of our progress!

I am looking forward to riding him better and continuing to improve our new tricks! Hopefully we will have a lesson with our regular trainer here in the next few weeks and can keep this good roll going :) Now if you have survived this long post here is a crummy cell phone video from parts of Sunday!