Over the weekend our barn hosted its 20th year anniversary horse trials! It's the only recognized event held in Oregon and it's always a highlight of the year. In our Thursday lesson in the dressage field Bentley was as I expected he would be. Hot, tense, and ready to go. We changed our approach a little based on our dressage earlier in the week and by the end for some decent work. Unfortunately for me our dressage did win Friday wasn't till 3:30 and our weather decided to go from upper 70s to upper 90s/100 just for the weekend 🙄 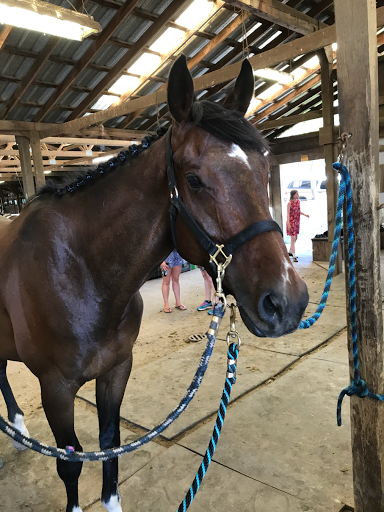 I want to forget our dressage test ever happened. Hands down the worst test I have ever been apart of. The sad part was he was actually warmed up quite well considering the circumstances and we were prepared to go into the test and lay down a repeatable (for a OTTB 6 months off the track) test. Judges comment was "horse appears capable- just not today". I can add being in last place after dressage as a first, and hopefully last, in my book. 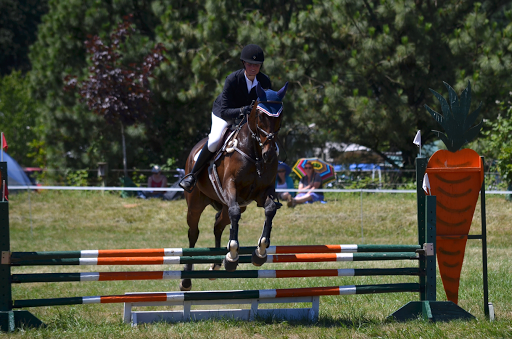 The thing about being in dead last is that there is no where to go but up! Day 2 was stadium day and I really didn't know what to expect. The jumps at our trials are decorated much more then most places. Bentley put in a great double clear round to give me a little more hope then I had after dressage! He was wiggly in the lines but never questioned me and felt very rideable. He moved up two spots after stadium. 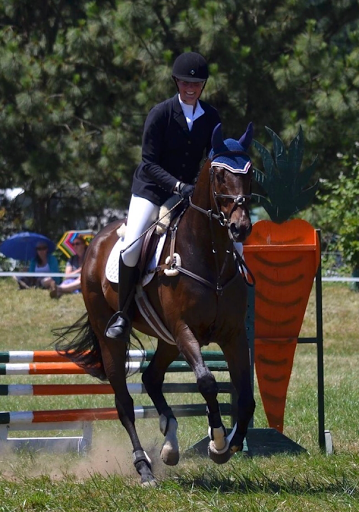 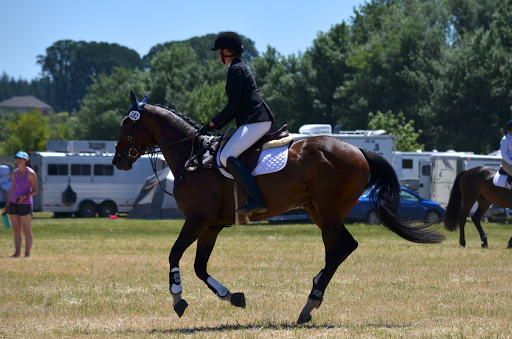 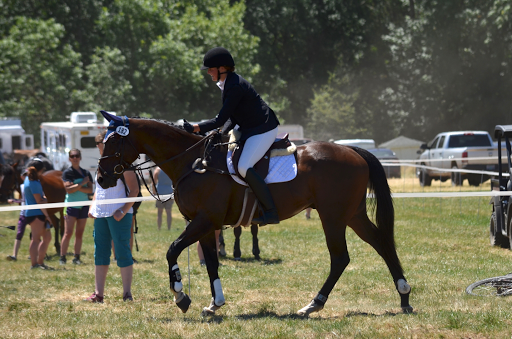 Day 3 was the day that I was looking forward to the most... XC day! The course had a few combinations, some new questions, but also started out pretty inviting. 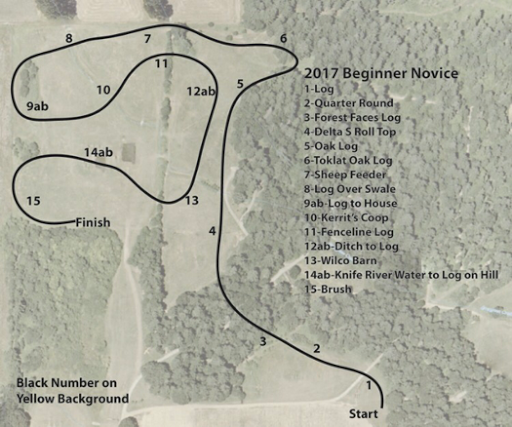 The only ones that made me think twice about were #9 and #11. #9 because of the blind 90 degree turn from behind the bushes and #11 because it was in the tree line with a small drop on landing and a not very open landing area. 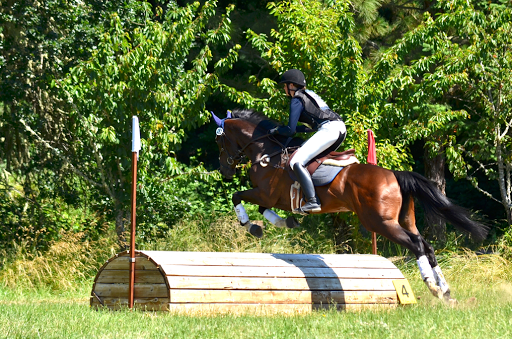 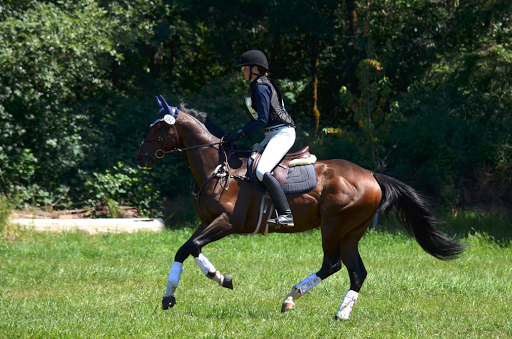 From the first jump on I knew we were going to have no problems. He was hunting the fences and questioned nothing! The changes in terrain, the light to dark, the shadows, nothing bothered him! He cruised around the course and even got praise from the announces on his beautiful ride at the end of the course. My favorite jump? #11, the one I was so worrried about! 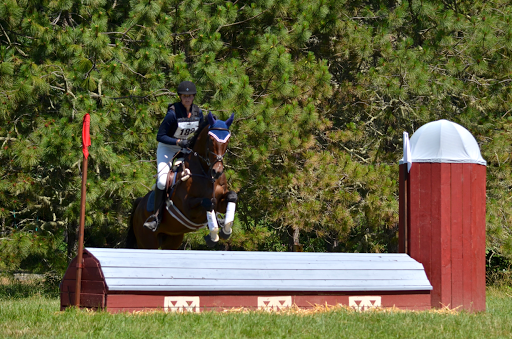 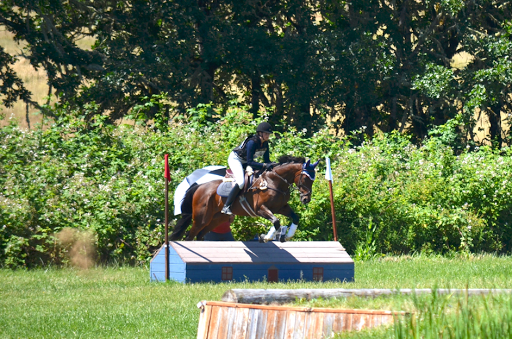 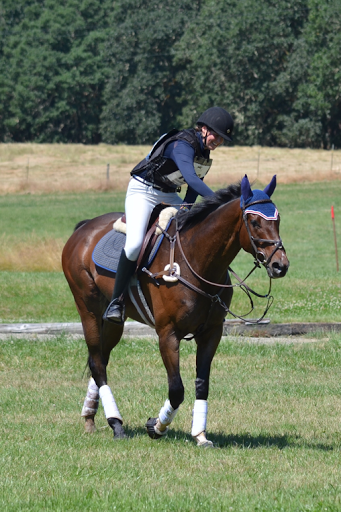 Again, he moved up 2 more places and finished on his dressage score in 7th place in the open division!
We have a lot to work on still. And as fun as XC was we need to work on adjustability so that I feel like I can open him up a little more without worrying about not being able to bring him back. Our trainer is going to ride him XC in my lesson this week to see if she has any tips. People don't believe me on how strong he gets out there because he doesn't throw his head around and looks pleasant. He just doesn't respond enough  to any of my aids other then one telling him to go faster! Onward and upward to Rebecca Farms next month!!
Posted by Unknown at 11:04 PM 6 comments:

The Reason I Own 3 Horses

One would think that by having 3 horses that I slave over that in any given circumstance I would have at least one to ride, right? Wrong... I am currently that person that has 3 horses and they are all broken 😩 Our vet showed up at the barn on Monday while I was there so I snagged them and have them check out Bentleys popped splints. My paranoia level for horse injuries is at an all time high and there is currently another horse in our barn with a fractured splint bone. So we radiographed. There didn't appear to be a fracture on either but because it was still early on he said it could be hiding. So all week I have been getting up early and doing two a days at the barn to deal with my broken ponies. 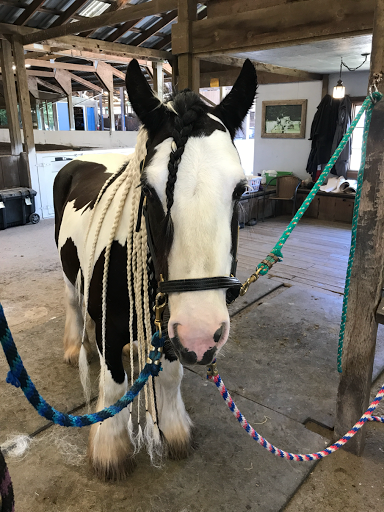 Do they care about my declining mental state? No...!
I have been really good about icing, surpassing (thank god it's back on the market!), buting, and wrapping him twice a day. So fingers crossed it has done the job. The bumps seem smaller and in fact the smaller one is almost all the way gone. I get to call the vet tomorrow and evaluate if we can go back to work. Fingers crossed we get the green light! We are supposed to have a dressage lesson next Sunday and our first recognized event the last weekend of the month. More importantly though we are on day 4 of stall rest (with no hand walking allowed) and the hamsters are beginning to come off their wheels! This is a different situation also because he has been sound the whole time. So it's not as cut and dry about when to return to work, etc. 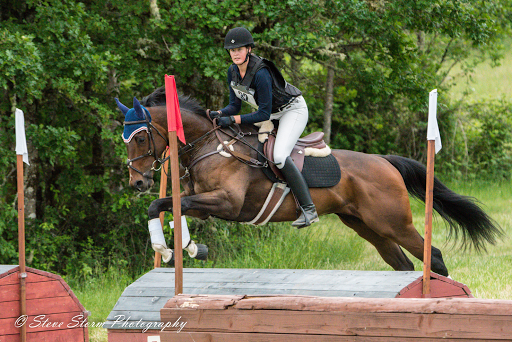 He wants to do more of this!!
Not to mention the fact that I had to send in our entry for Rebecca Farms with my currently potentially broken horse because if I didn't send it in on opening day my chances of getting in are slim. Here's to hoping for returning back to work so we can get a BN recognized under our belts before we head to Montana to go novice! 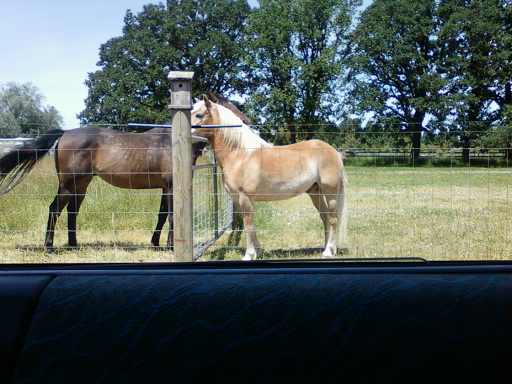 The free loader enjoying his new pasture digs for the summer. Already found a friend!
Posted by Unknown at 11:12 AM 3 comments:

When the tables turn

Anyone who events knows that most eventer ideas about dressage fall somewhere along the line of  "we just need to survive dressage so we can go xc". I consider myself a dressage person that loves to event and take pride in my Wonder Pony leading events from start to finish. This weekend was our one day event and I got a little taste of the feeling of just wanting to survive dressage so I could go run and jump!
Hand walking Bentley around the dressage arenas the night before I was basically walking along with him standing on his hind legs. Not a promising start! Thankfully he is more manageable under saddle and tried no acrobatics come Saturday morning. Unfortunately he was basically a bug ball of tension ready to burst. I spent the test containing him and praying for it to be over! Thankfully it was BN test A which is the saddest dressage test next to riding an intro test so it was basically over before it started. 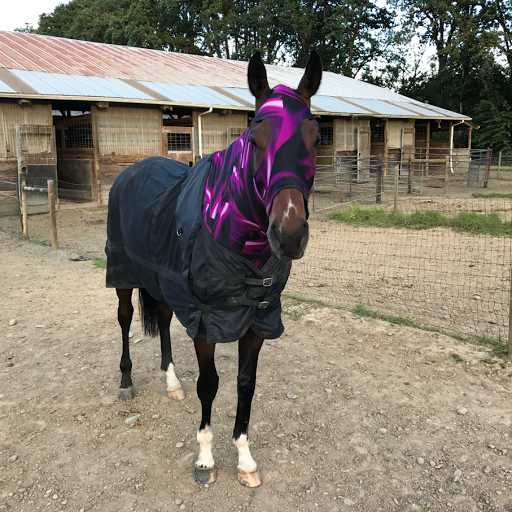 He did rock this manly sleezy over night though
I was disappointed after dressage but realize that it was his first one day and his first time riding a dressage test in an open field. Plus it helps when you get to jump next. He lived up to his reputation and jumped around stadium great. He was green to some of the combinations and I got him in bad to one fence, where he hung a back leg and pulled a rail, but overall he was rideable and couldn't have cared less about any of the full under the jumps. 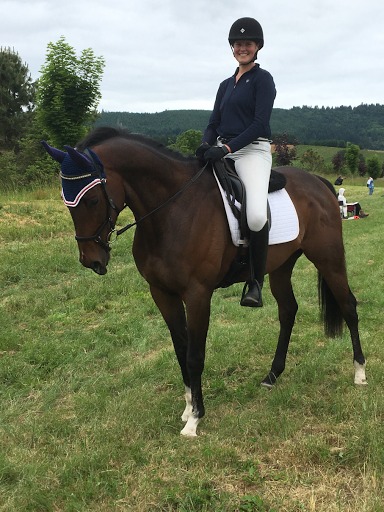 Bentley not wanting to be very photogenic after dressage day 1 but still looking mighty handsome
By XC he was a little tired which in turn made him even stronger. But that boy had zero stop in him and he attacked every single fence, sometimes a little too much! He was having a blast! I have no worries about taking him to his first recognized event at the end of the month. He eats jumps for breakfast! Now we are off to work on opening up his gallop and bringing it back. He gets quite strong and doesn't allow me to rebalance him for the jumps very easily which will definitely need to change as we move up. I felt like I needed an oxygen mask after our 4 minutes BN course 😂 He ended up finishing in 2nd place! I guess I can buy that getting a dressage score of a 37 doesn't take you out of it now! 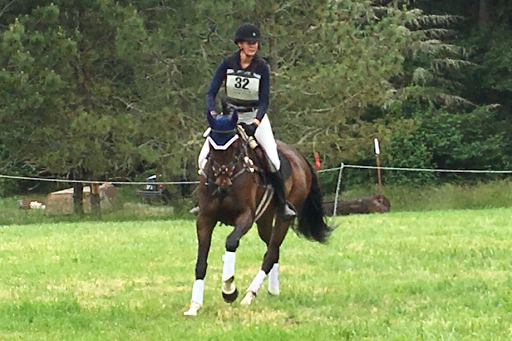 Unfortunately when I went to go ice and wrap him later that afternoon he had what look like two splints pop 😩. He was sound, happy, and didn't palpate sore to them at all but it still made me nervous. So this morning I came with the intention to show but not sure what would happen. They appeared smaller this morning and he was still sound so I tacked him up and went to dressage. After our hot mess of yesterday I really wanted a re do. He came out much more relaxed, rideable, and more mentally there. With lots of room for improvement the baby horse still scored a 32! I was super pleased with him and although that is not where I want to be in the long run I am very proud he stepped up and improved that much in one weekend. 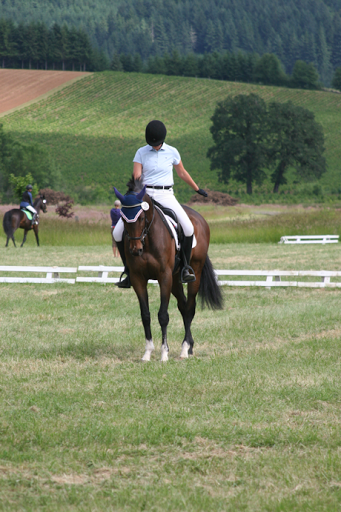 I decided to save him for another day, where I wouldn't worry about breaking him more, and withdrew after dressage. It was an unfortunate ending to an otherwise very successful weekend but his health and future are far more important then a little one day event. Plus, we all agreed he didn't really need to jump again today after seeing how super he jumped yesterday. 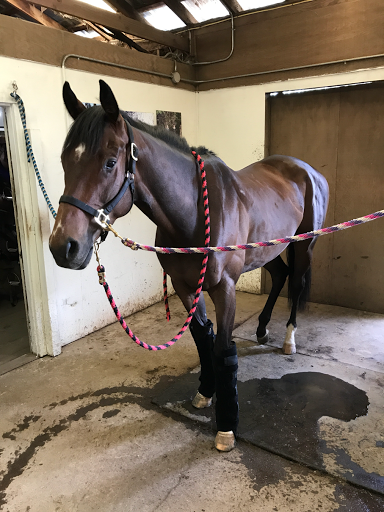 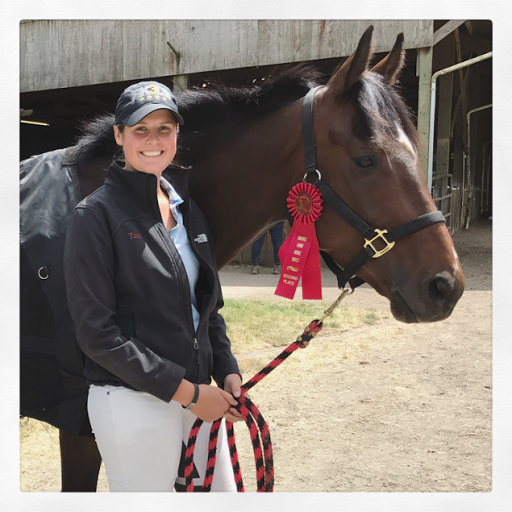 His entry is in for his first recognized show in 3 weeks and his entry for Rebecca Farms goes in on Tuesday! So excited for this boys future. He really is a special one!
Posted by Unknown at 4:56 PM 3 comments: