Montana was full of up and downs but ultimately I came home feeling extremely happy with my horse and feeling like it was an amazing experience for both of us. It just didn't quite have the fairy tale ending that it could have. 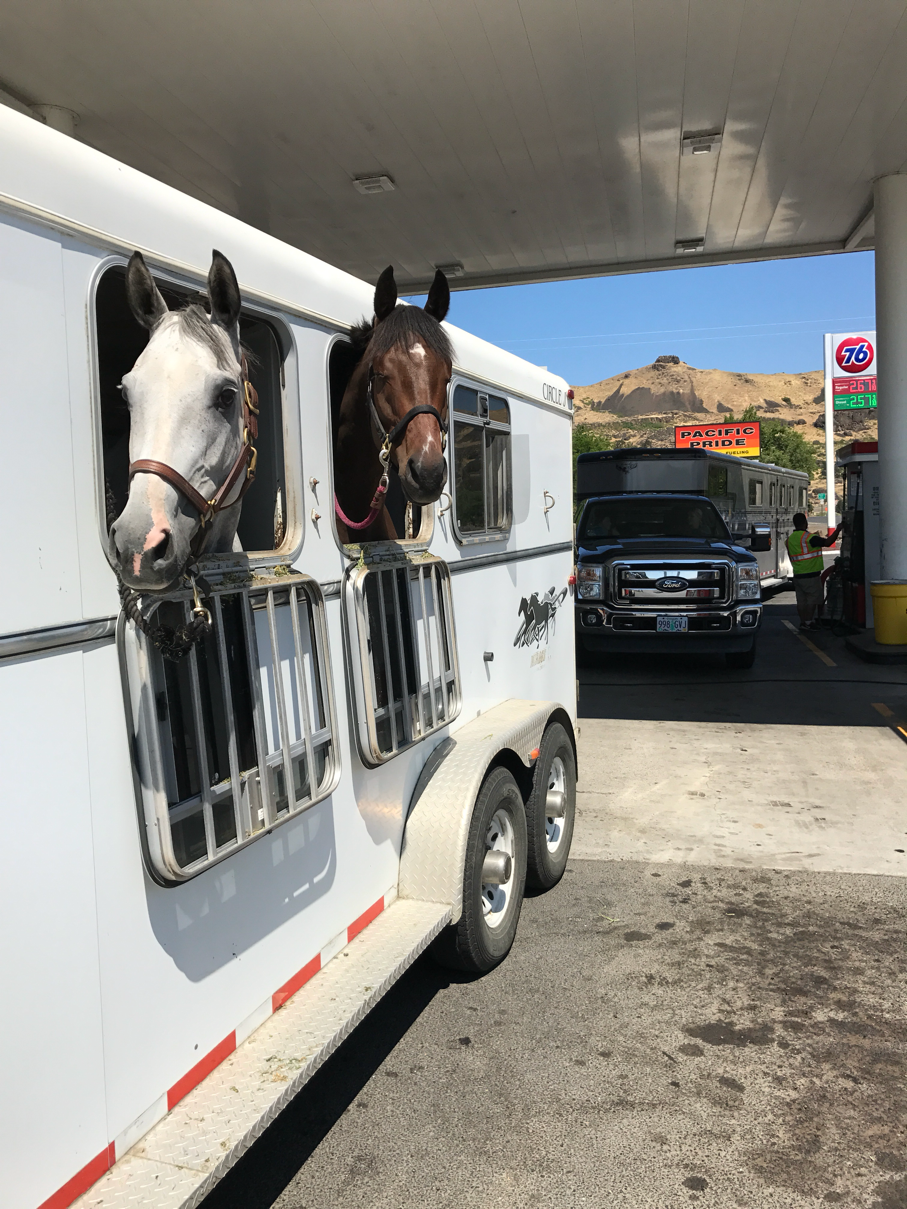 Bentley loaded, hauled, and traveled like a seasoned pro which was very nice. We thankfully had a great layover barn in Spokane that had very nice stalls with runs attached so the ponies didn't have to get off the 8 hour trailer ride and just sit in a stall all night. 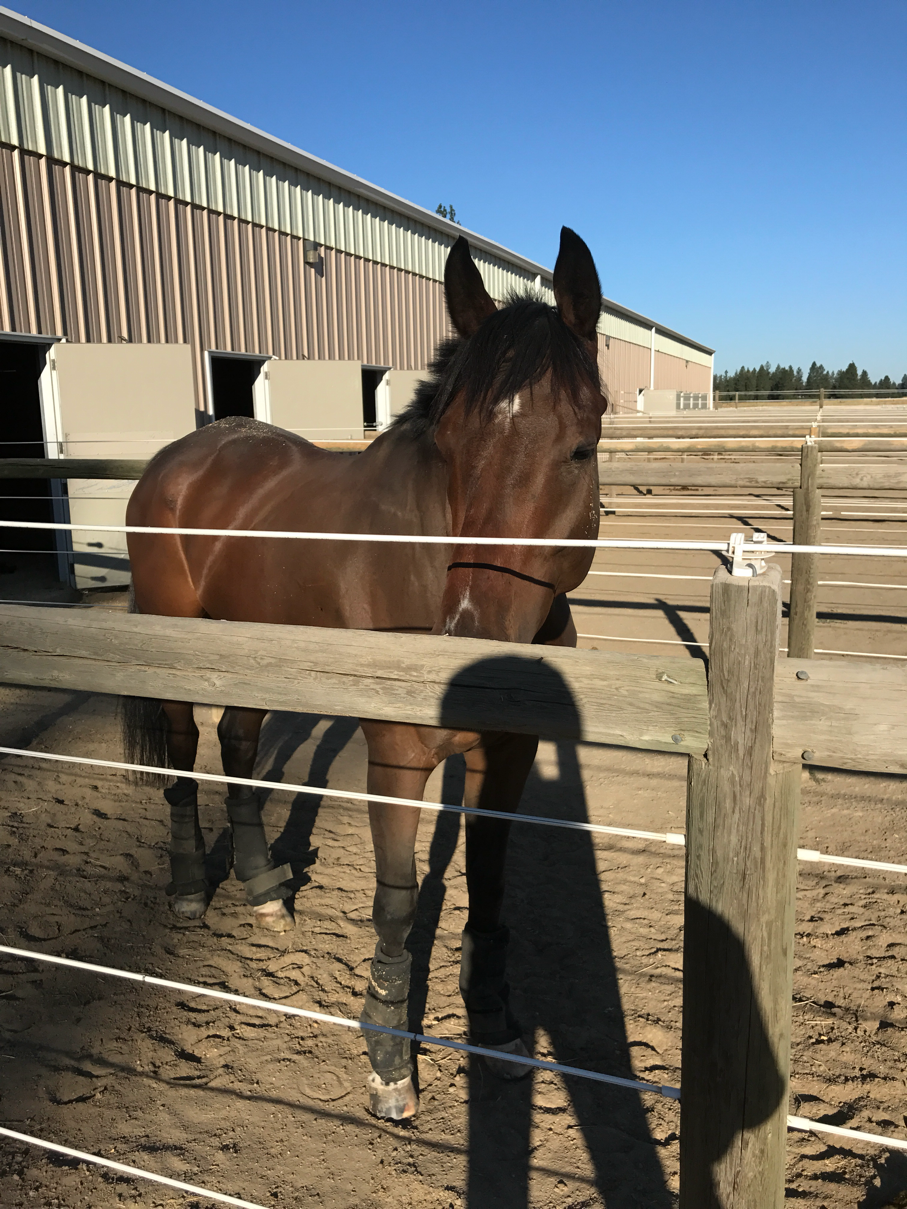 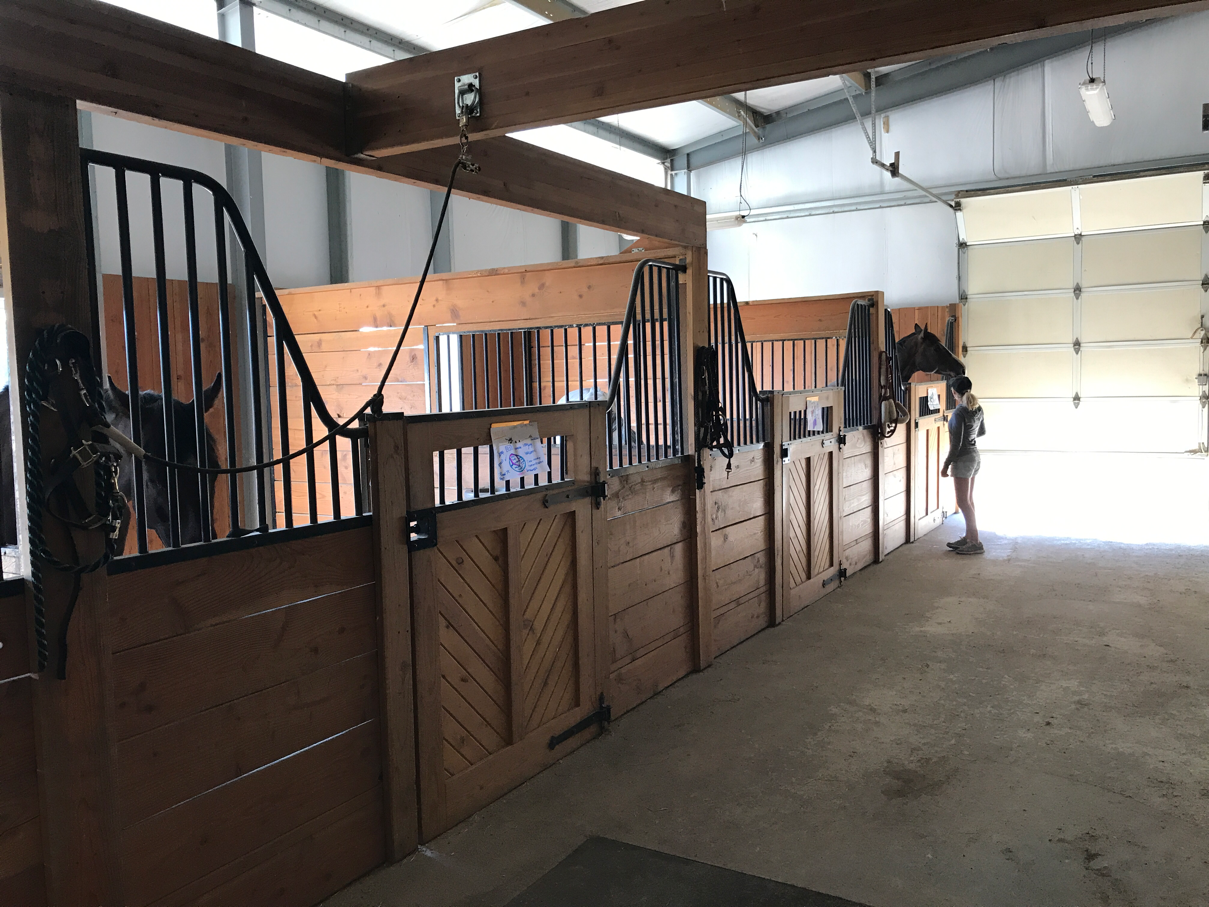 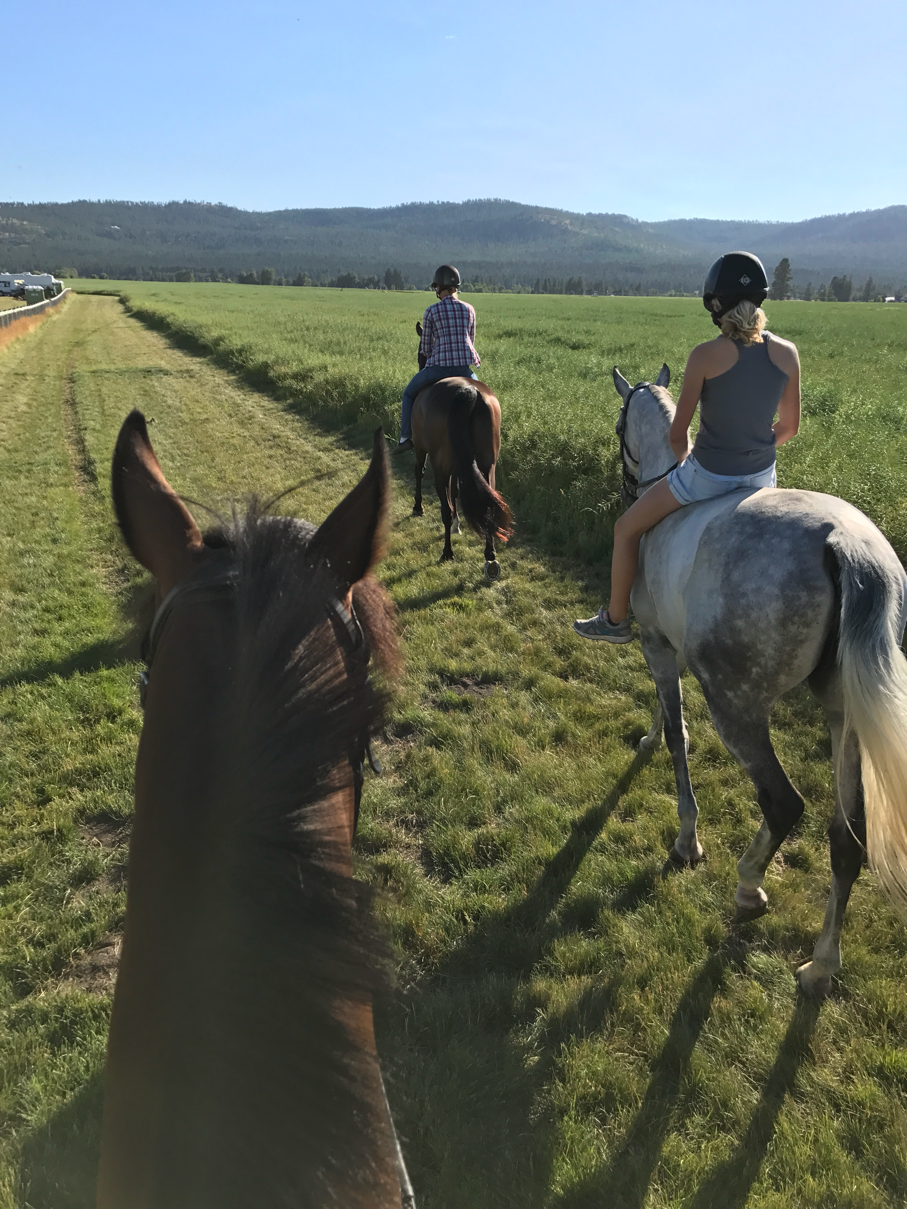 We arrived at Rebecca Farms on Sunday and the following day we went Xc Schooling at a place nearby. All the horses were great and we had the positive ride we needed before tackling this first novice. On Tuesday we had a light dressage school which included riding in their giant arena with approx 30 other horses and, for parts of it, 3 giant water trucks. Bentley couldn't have cared less about all of it and we had a nice relaxed school! Just what we both needed. 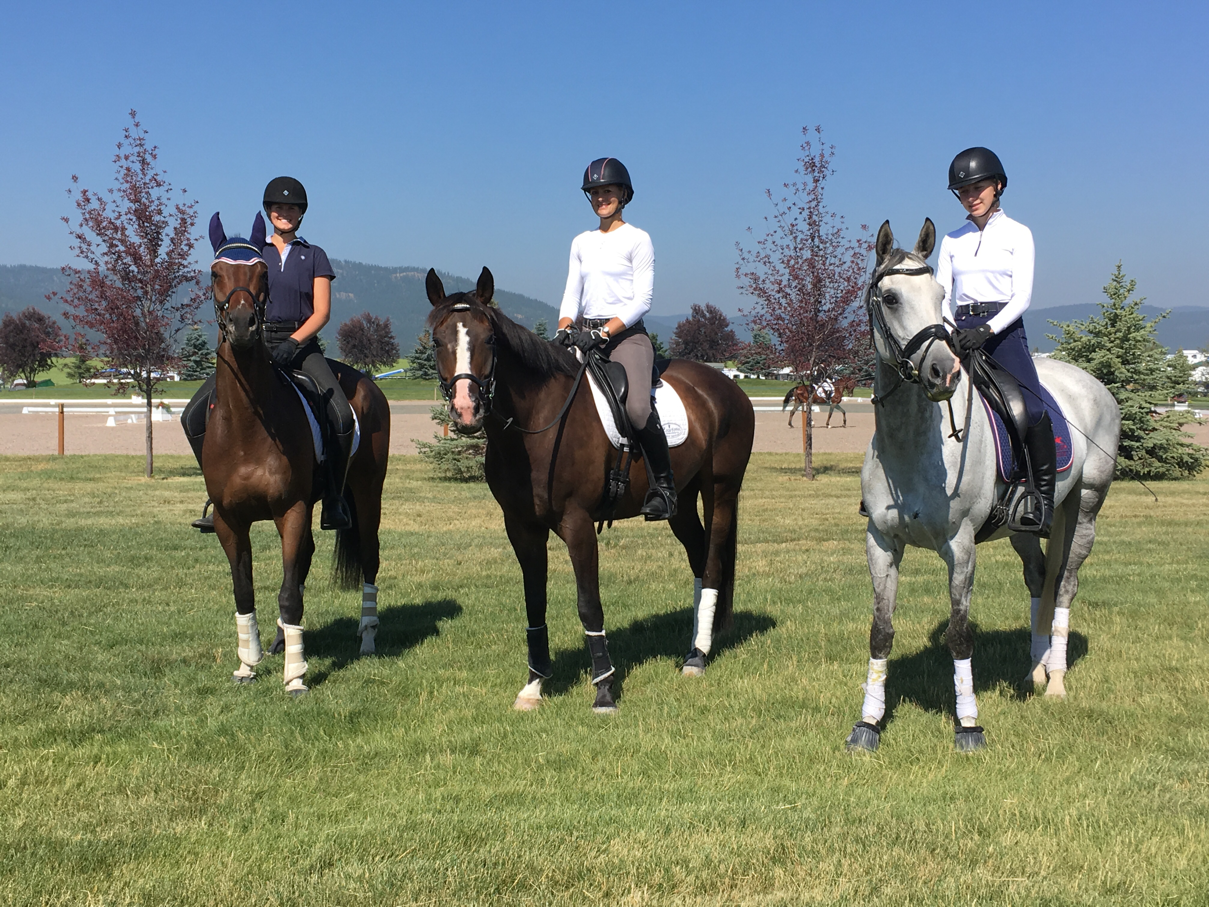 Dressage day rolled around and he was warming up much better then I had anticipated! The normal issues we always have with him just being green but no nonsense like we had at Inavale last month. We went in and put in a solid test (for him at this point in his training at least) and got a 34! We were tied for 9th out of 26. 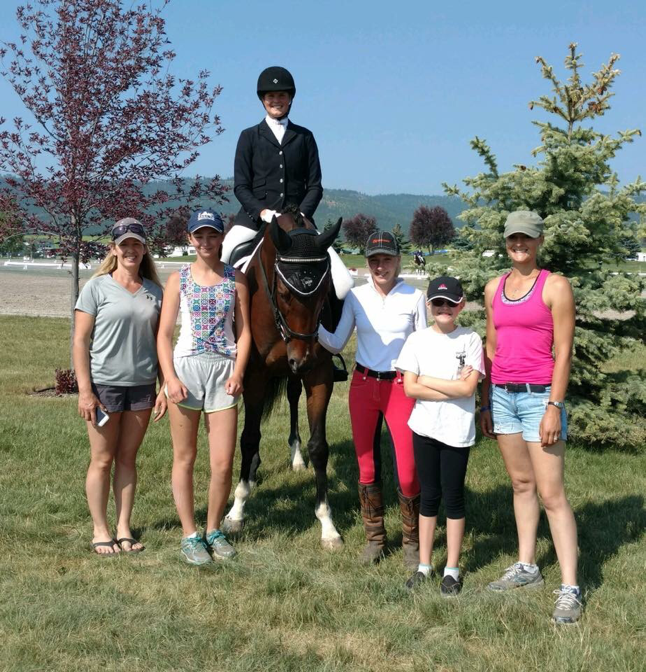 The XC walked big to me. Definitely had mostly maxed out novice fences, a half coffin, and a corner. But overall the course was open and flowy. I knew I would really have to ride the first 7 fences but thought the second half of the course would be very doable. He came out more backed off to the fences and strong between the fences then I thought he would but he was getting it all done. The half coffin that I had worried about (if you remember how ditchy he was previously) rode beautifully! I have him a big pat and let him roll a little bit more after it. Unfortunately the whole "letting him roll" didn't pay off as he was quite strong and resistant to my half halt coming up to fence 8 (a steeplechase type fly fence) and I just think he never really registered he was jumping a jump and we had a runout. He popped right over it on second try. It was extremely disappointing because he doesn't really ever say no to a jump and I feel like I didn't give him the best ride to it (even if he wasn't being the most cooperative). He jumped around the rest of the course well and I crossed the finish flags with an incredible amount of pride and disappointment at the same time. My horse is so much better then what the score on paper said after xc but you live and you learn. He jumped around a novice course, and made it feel easy, after just 6 months off the track! How cool is that?! 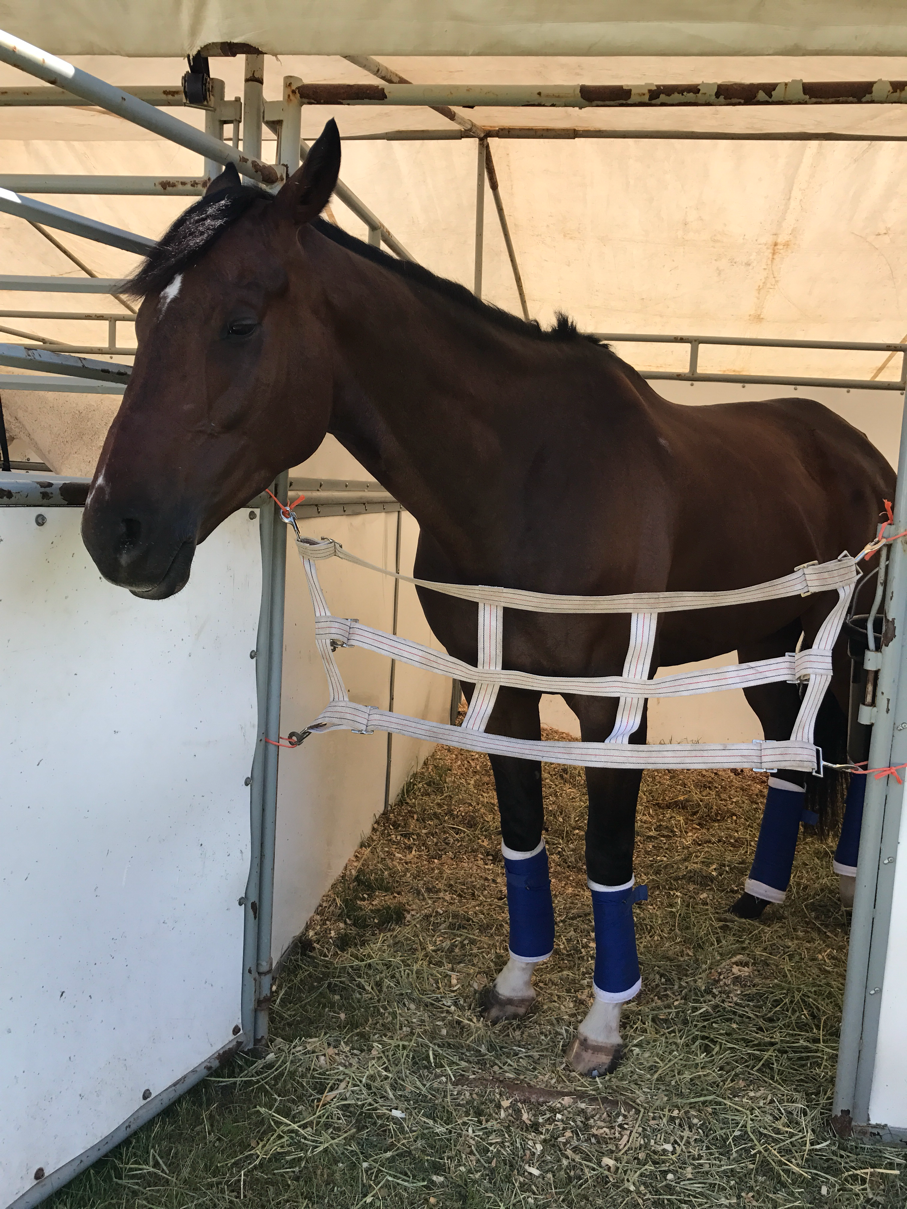 The silver lining was that there was zero pressure for stadium. Bentley is very scopey but he doesn't always use it in stadium and had the potential to have some rails. Again, the jumps were maxed out with some big oxers but the course looked fun. He was very bold to the fences and was jumping great. He got away from me around the turn to #4 and got flat so he pulled a rial with his back leg. Otherwise he was jumping really well and wasn't wiggley between the fences at all like he was at Inavale. Fence #8 was causing a lot of problems for people but that was our best line of our course! 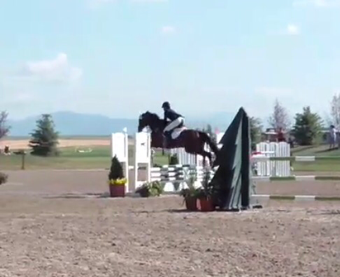 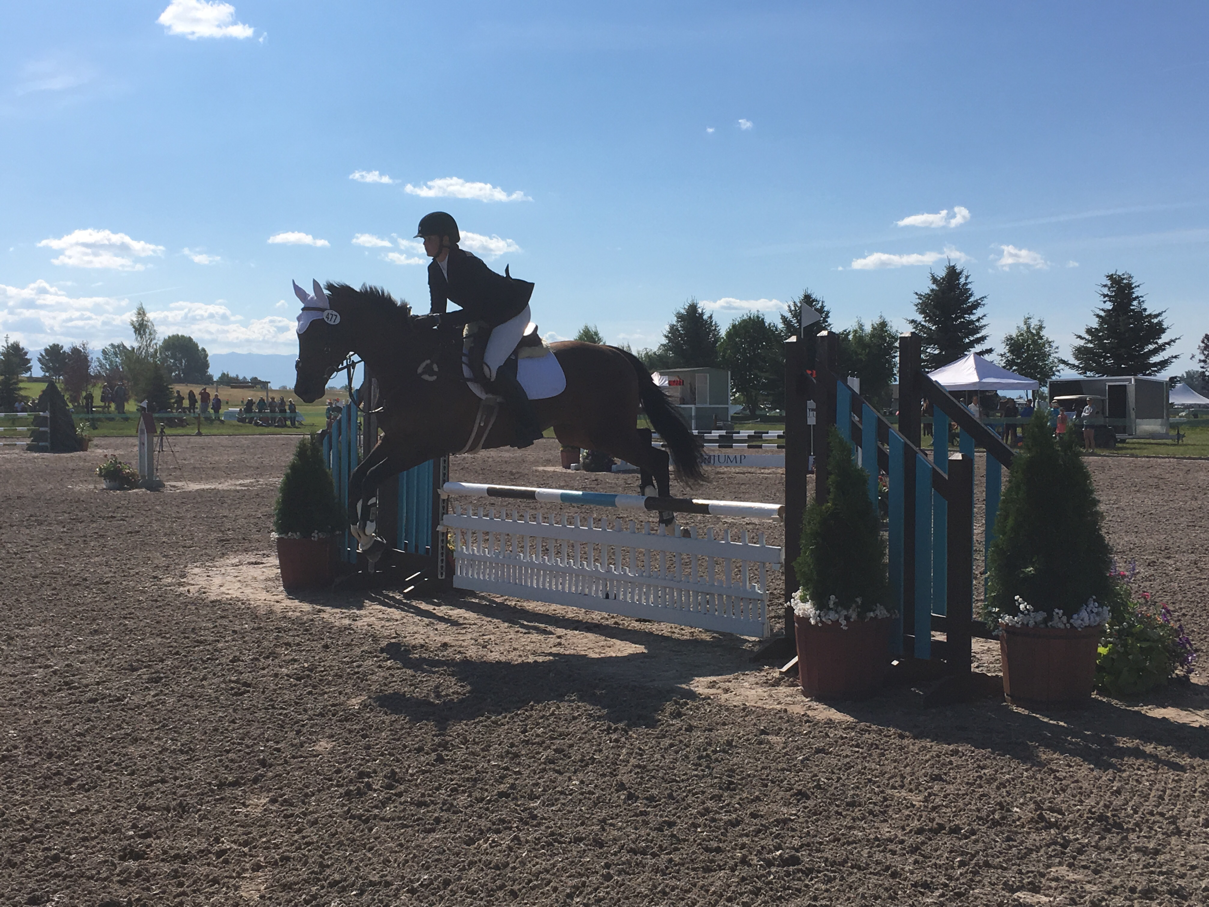 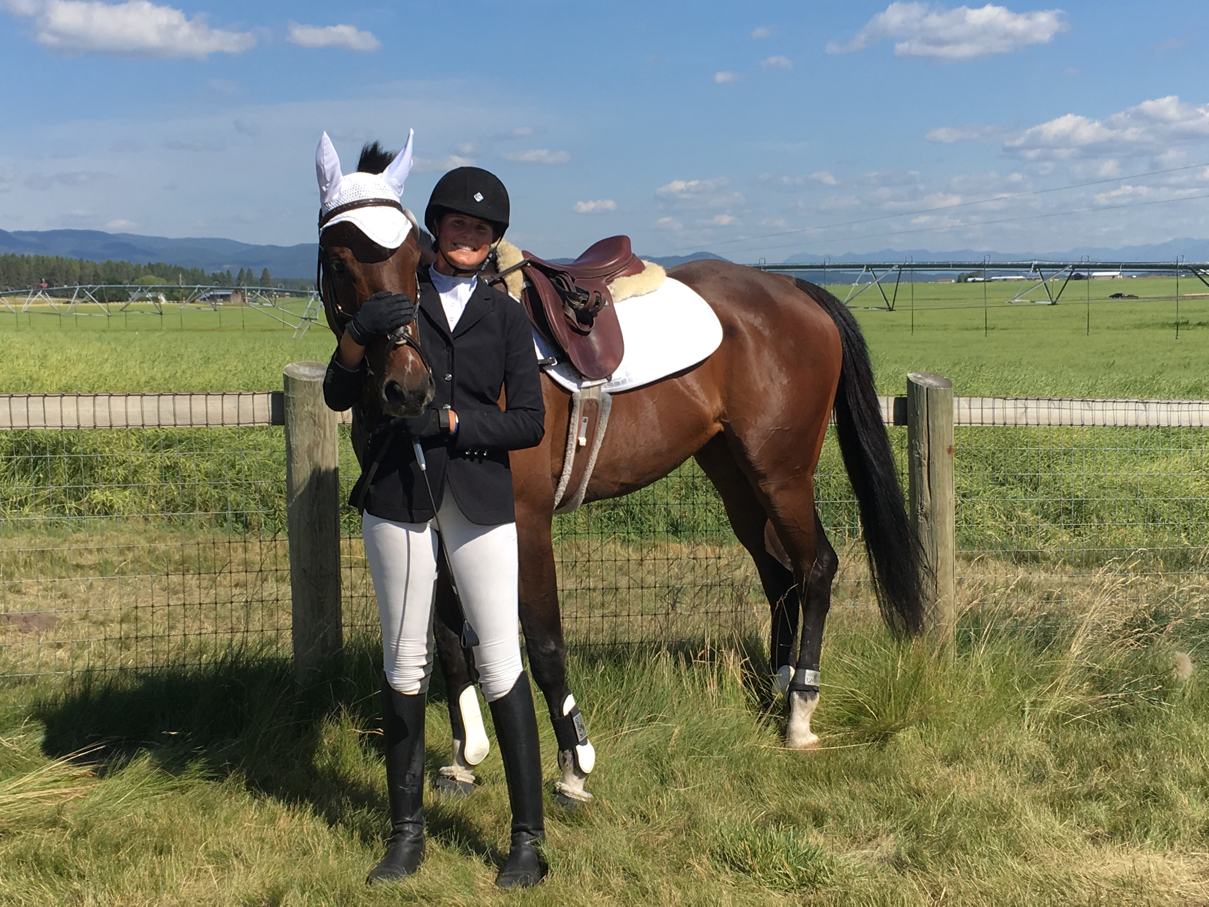 It is hard to not look at what could have been. Such as if we finished in our dressage score, like he is fully capable of doing, we would have tied for 2nd. All the pieces are there we just need to keep working at the details and hope that one day they will all fall together at a show. The experience he gained this week was definitely a game changer for us and he handled the whole week like a professional. His future is looking very bright and I can't wait to keep chipping away at it all!

Over the weekend Bentley, some friends, and I made the 4 hour drive up to Aspen to get a solid off property Schooling in before Rebecca. The only other time Bentley has schooled away from our barns course was the first time he had ever gone xc. And although it was mostly successful he managed to almost kill our trainer because he was a big pansy about the ditch. I really haven't been worried about it but really didn't think it would be fair to him to not give him some practice before such a large event. 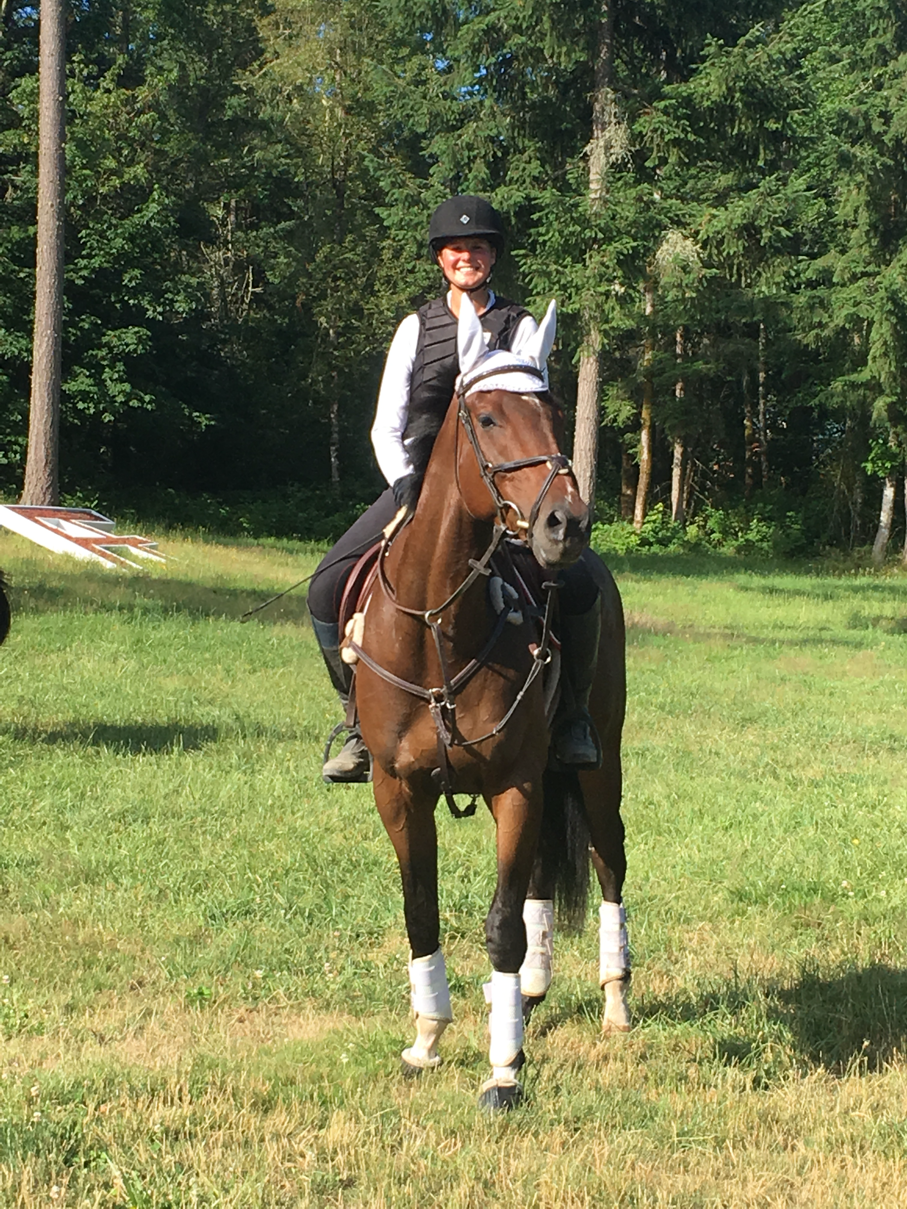 I got off work early on Saturday and we loaded up and made the drive. He hauled great and hopped off the trailer like a pro (not what I was expecting!). We hand walked the ponies around, set them up in their accommodations for the night and went to our hotel to sleep. My group went first thing Sunday morning and I really could have gone either way on what I thought he was going to act like. Much to my surprise he was even more relxed then he is at home when we go xc! He warmed up super well and had his game face on. We started over some baby logs and worked our way up to some BN jumps and then began stringing things together. He was confident and knew his job. What an awesome feeling! He even jumped up a bank like a normal horse! He also was handling the group atmosphere (aka: horses cantering and jumping around him while he had to wait) SO much better then expected. That was a huge bonus. 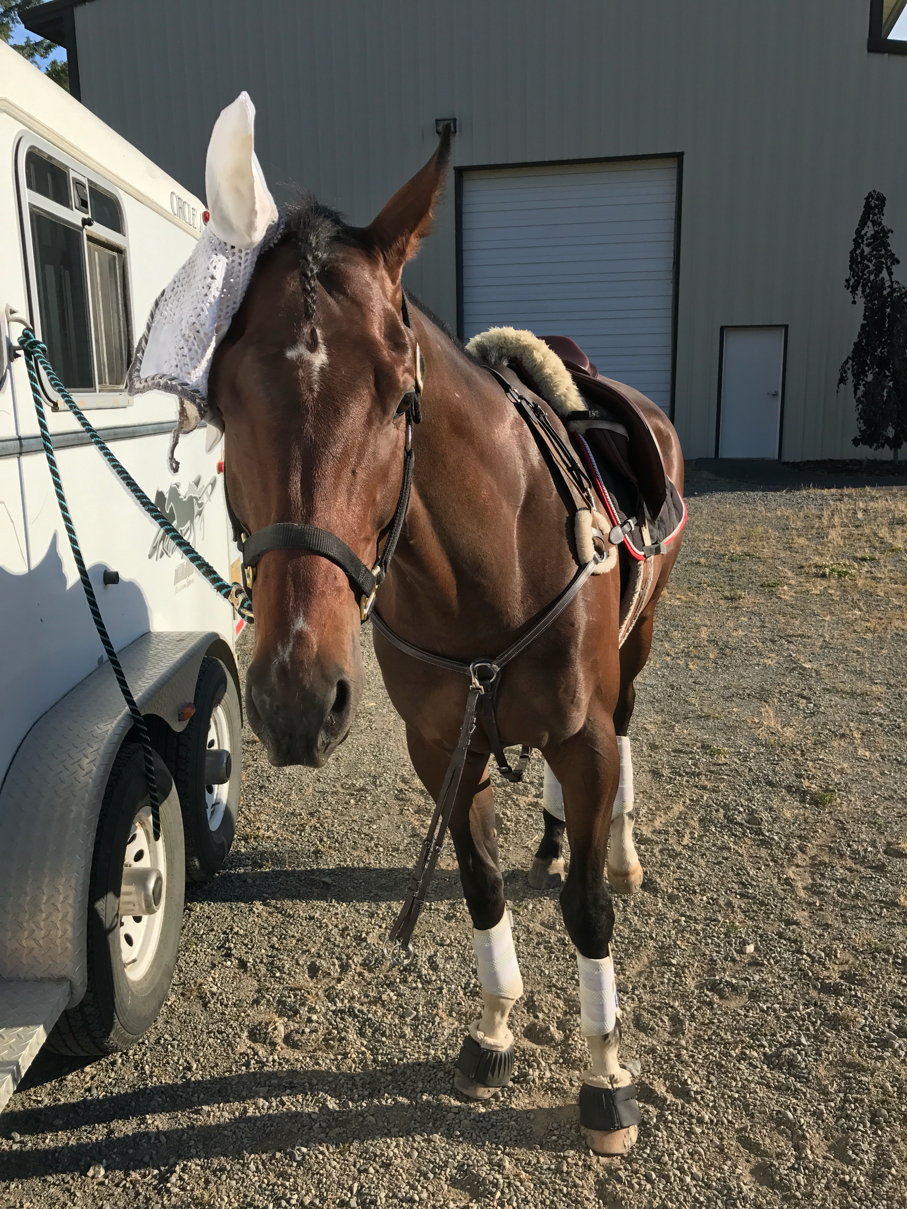 Cut out fences, jumps out of the water, jumps up hills, the coolest pirate ship jump, all without any problems!

On that note we headed to the next field. To the ditch 😳 He has been 100% solid to the ditches at our barn. Recently we introduced him to the much wider novice ditch and he balked at it but was easy to get over. And has been solid to it since then.. but still. Would he be okay to a ditch at a new place? Not only did he jump it first time but he jumped it normally and without even really looking at it 🎉

We then jumped the training trakhaner (it was a novice height) easily and moved on to yet another field. In that field we did some combinations with some log stacks, barns, etc that he negotiated quite easily. By now he was getting a little tired and was a little harder for me to to adjust but was still being very good. We ended at a second water jump where we practiced mini 4 jump courses involving the water. I am very thankful that he is brave about water! Then, as a grand finale, we did our first jump in the water. Our first approach surprised him as we had been cantering right by the jump previously and a lack of riding on my pet almost ended with me in the water 😂 thankfully he stood still as I shimmied my way back in the saddle and came at it a second time. This time with my legs on! And this is what I got:

What a boy! It was a great outing for us and left me feeling even more ready to tackle our first novice at Rebecca next week. Now to get packing for our journey up to Montana!!

It is crazy to think about but in under 2 weeks Bentley and I (plus some more barn friends and trainer) will be heading to Montana for Rebecca Farms Event. 6 months ago (June 25th to be exact) when he came home I would have thought you were crazy if you told me Rebecca was an option. But, I am SO excited that it all came together like this. My little crazy talented baby OTTB! Mostly crazy for dressage with a lot of talent while jumping 😂 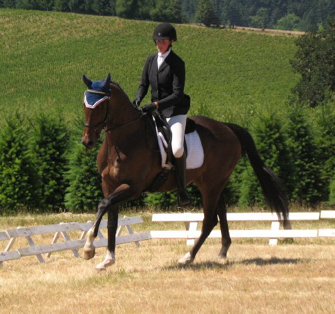 Holding on for dear life
We had a spectacular xc lesson yesterday where he schooled much of the novice course. Trakhaner, coops, ditches, barns, tables, water combinations, etc. He is gaining adjustability and starting to be more careful with where he places his legs. Not much fazes him when he is on course which is very nice since he gets quite hot when he isn't. Put jumps in front of him and give him a job? He turns his game face on! 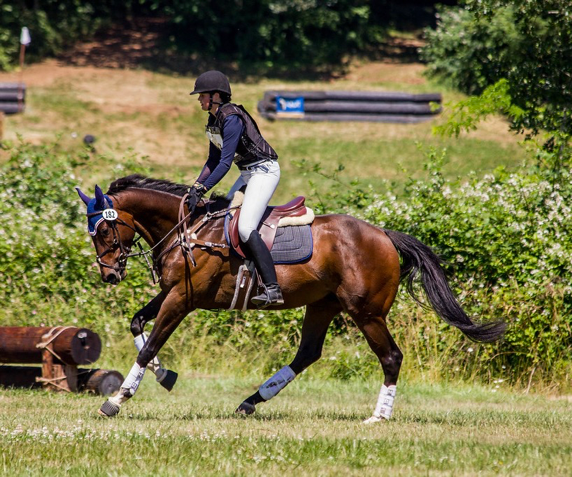 This upcoming weekend we are heading up to Aspen Farms for the weekend to get in a little off the property XC school in. That will be a great prep for Montana. Then the following Saturday we head out bright and early! This trip has the potential to be a big "growing up" trip for him. It also sets us up nicer then any more local event because he gets to be on site at the show for 3 days before we show. Not only that but we get to xc school at Heron park (minutes from Rebecca) 2 days before we compete. Bentley is getting a lot of big boy miles this month! Looking forward to an amazing event 😃 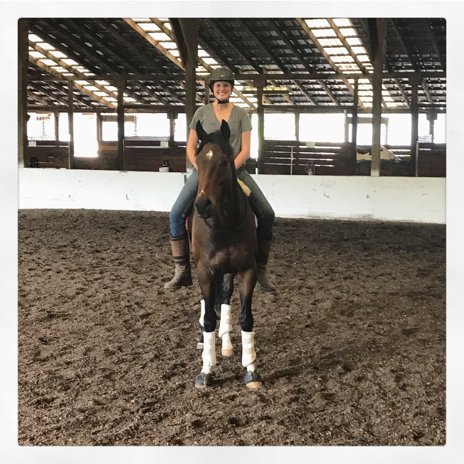