Just having some fun

I have had a blast with the pony this week! We have been on multiple trail rides and bareback/bridleless rides and I have loved every minute! It amazes me how much he puts up with from me. In sad news he got his tail chewed off... it will take probably a year or more to grow fully back. I try to not talk about it, I did my grieving and have moved on! haha

I still have not heard from the show people about our cooler! Not like it will be done by this date or sorry its taking so long but we are working on it. Nothing! 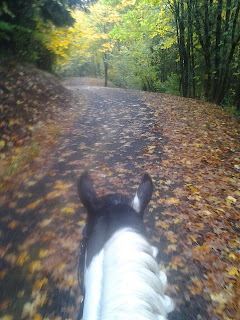 Posted by Unknown at 8:08 AM No comments:

Looking back on our 2012 show season I am so proud of my pony! We had a couple hiccups in our schedule of some shows at the end of the year (when we didnt know what was wrong with him) so we missed a dressage show, an eventing derby (which we didnt get to at all this year as the first one got cancelled), and the Northwest Gypsy Affair. So we didnt get to go to a breed show or a derby this year at all, sadly. On a happy note, out of the 9 tests that we rode at shows this year (all at first level) we won  of them! The other two? we placed second behind dressage trainers (one being the ponys teacher and the other one of our friends)! What more could I ask for! Along with that we were 2012 ODS First Level League Champions and took home both the high point and reserve high point percentage from the Beaver Piaffe show. Our test average from the whole season is a 69.5! I would say this season has done us well :)

Once we get our cooler and trophy from the Beaver Piaffe show we are going to do a mini photo shoot with all our winnings from this year :) But I have no idea when that will be... I still have not heard from them.

This of course would be my dream schedule. Im positive it wont all happen (I hate not having money!) and I will have to narrow it down but I WILL be doing a recognized event and I WILL be showing at Devonwood  one way or another in 2013!
Posted by Unknown at 9:44 AM 1 comment:

Its been real 2012... Real good that is! Im so happy with how we did this year. Today was our last show of 2012. It was a dressage show put on by OSU. We did first level test 1 and 3. I did that so we didnt have to warm up as much for test 1 because he seems to think he needs a 5 hour nap in between tests :) That way we got to do 2 tests but I dont feel as bad working him good. Maybe im just giving him excuses. Its not like 2 tests is any different then working at home!

Anyways he was a start as normal. There were a few things I knew could have been better right when I came out but overall I was very happy with both of them. Especially considering he is just coming back after having a month off. Most horses a month wouldnt do much of a difference but 3 days off and he loses fitness. A whole month? By then he is back to mr. chub-a-lub who cant work 5 minutes without sweating! My goal going into today was to get a 70% (or above) at first one and 65% (or above) at first three. I know that is asking a lot but this horse has spoiled me so much with our high scores! He feeds my ego way to much (and it already doesnt need any help!). Well.... mission accomplished! We got just below and 72 and just below a 74, the two highest test scores of the show! Earning us the high point cooler and the reserve high point trophy. The biggest improvement I have seen has been in our lengthenings. He is actually really starting to get the idea and we are getting some decent ones! We had been getting 5's or a 6 in them but didnt get below and 6.5 today in any of them! I think he really just didnt understand what I wanted from him before. Now it is just a matter of fine tuning.

Overall we got some great comments and great scores. Im so excited to see how we progress over the off season and see where we come out next season. I hope to see 2nd level in our future. I have told my self since the beginning (once we figured out he is good at this dressage thing!) that if we made it to 2nd level together before topping out, physically most likely, I would be one happy girl. This horse continues to take me places I never thought I would be able to go! 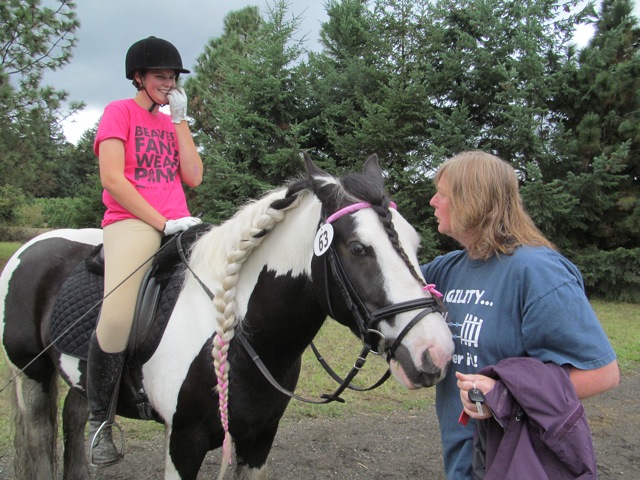 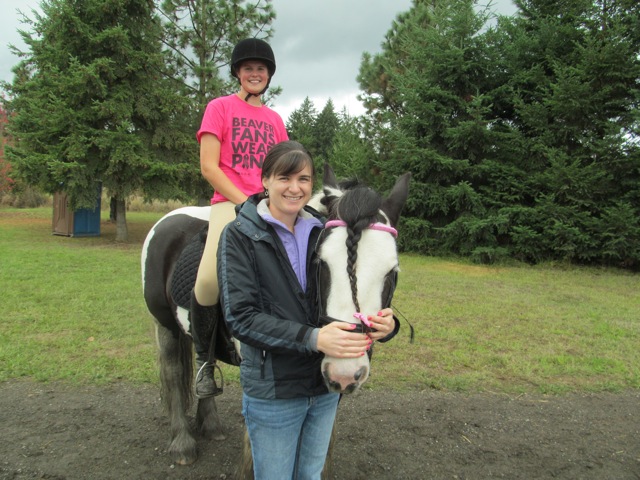 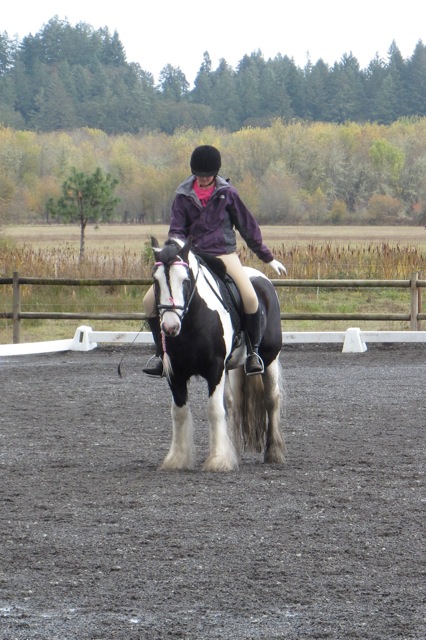 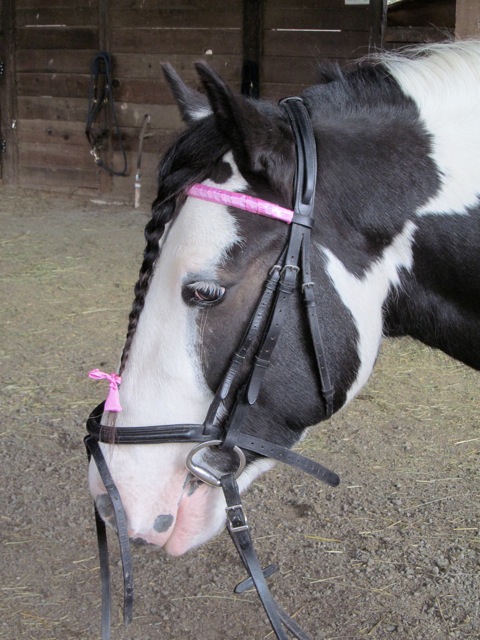 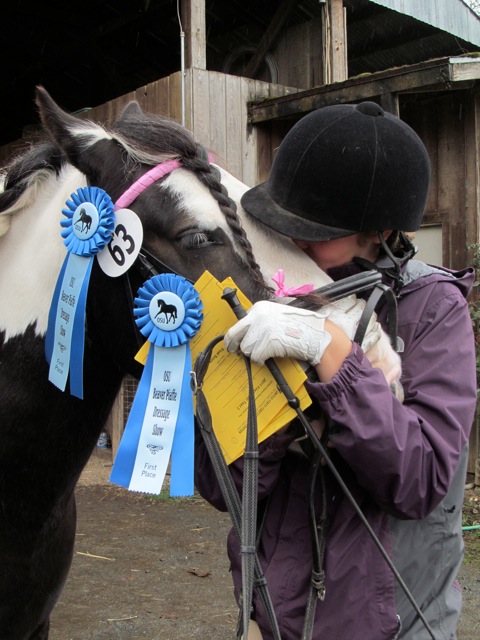 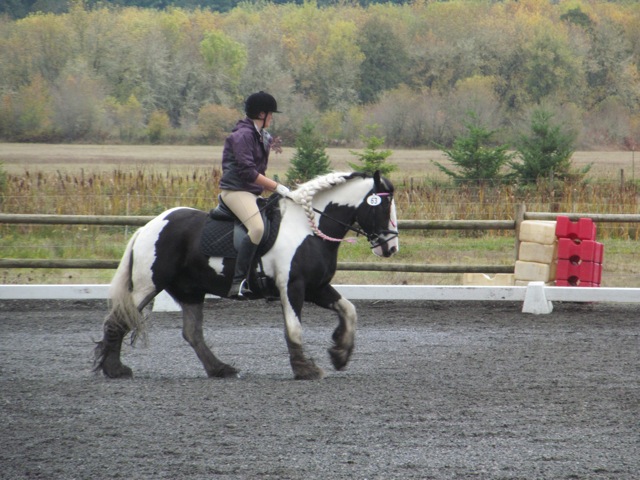 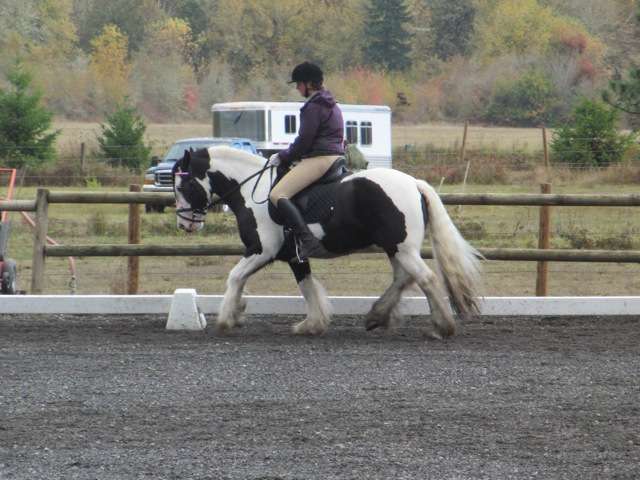 Posted by Unknown at 9:32 PM No comments:

Well fingers crossed! I am sending in my entry today for the OSU show. He has been working great! I have actually decided to do First 1 and 3. He is still coming back into shape and the less I have to warm up for our first one, the better our second one will be. I have played with a little lengthenings but not much. He is really starting to grasp the concept although we are still too rushy. Ill take what I can get at this point!

Hopefully we can go out of the 2012 show season with a bang :) I was just thinking yesterday how out of the 7 tests we have ridden we have won 5 of them! The other 2 we have come in second behind dressage trainers (one was our Mary and the other was another friend!). I would say that is not a bad 4 year old year for him! We will see if we can uphold our stellar record at our last show :)
Posted by Unknown at 7:39 AM No comments:

Really though. Riding is one thing. It is great and I love it! It is fun to ride or work with other horses but when you havent been able to ride yours for awhile riding other horses doesnt really help. I have learned definitely not to take him for granted! Even though I do sometimes... like when I tried to carry a jump standard while on him, bareback, in a halter. Yeah that didnt end so well :) But he has to remind me that he isnt a Super Pony he is just a super adorable black and white one! Anyways... There really is nothing like being able to ride your horse!

Currently I am riding/working 4 horses on various days (including my own). It actually is really cool to see how different all these horses are and how each of them pick up on things differently. Part of what is nice about your own horse is that you know what to expect from them and you know how to ask them for what you want. With all these other horses I have to learn how they have been asked! I feel like I am actually learning a lot from it and it is making me a better rider also. But at the end of the day there is nothing like looking through those cute little black pony ears :)

Speaking of those ears, he is doing great! We are back in work, cantering, and everything has been going smoothly. I keep our rides short and sweet with long warm up/cool off walks outside. He seems to be coming back into riding shape both physically and mentally. When I first started riding him again he was like riding a 4 x 4 freight train! We are finally getting ourselves back together and looking more like we actually could have won our big pretty Championship ribbon and not like we stole it on the way out!

The pony went back to work today. It hurt to ride today but it was no unbearable so I kept going! We just did trot work again. He is feeling good still which is a great sign. Depending on how I feel tomorrow we will try some canter work! Yay! I am really hoping to take him to the OSU dressage show at the end of the month. We were supposed to go to the Two Pennies show the other weekend but obviously that didnt work out. I would really like to hit one last show to end the season! We will see how we do in the next 2 weeks :)
Posted by Unknown at 9:24 AM No comments:

The poor pony hasnt seen me since Monday. I banged up my hip and arm pretty good (but nothing serious or bad) and have been gimping around everywhere. So I obviously havent been able to ride! I would have gone out to see him yesterday but just didnt have time. He had been going back into work really well. We still had not cantered yet but he was feeling solid at the trot. Im going to try to hop on him tonight and see how I feel. Worst case I can just get him out and walk on him.

I really hope I am clear from any more awful things for awhile. I would say getting rear ended and falling off 2 horses within 5 days of eachother is enough for awhile!
Posted by Unknown at 9:41 AM No comments: