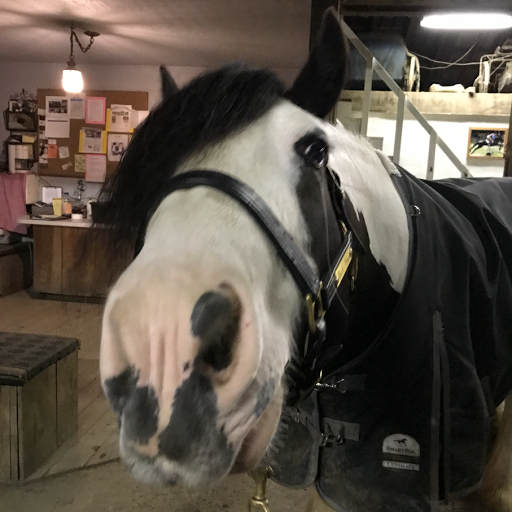 We will get the bad news out of the way first... 3 surgeons looked at Mystics radiographs and all agreed that his side bone is fractured. They also agreed that with the nerve blocks that were done he should have blocked significantly better, if not sound, which was not the case. So the potential of there being a bigger problem is still at play. The vet school is having a lameness course and they asked to use him. Thankfully that means I will get all the diagnostics done at no charge to me. So he will get re nerve blocked (and they will go up higher) and radiographed again. Also any other diagnostics that may need to be done if something else is found. So everything is up in the air until he goes in the first week of May. Either way, we know there is a long term rehab involved with the fractured side bone (and potential for surgery still).
Bentleys update is much better though! Here is a comparison picture of him when I got him versus last week. I wish his ears were up and he wasn't standing quite as funny but keeping him still with his head off the ground was quite the chore! 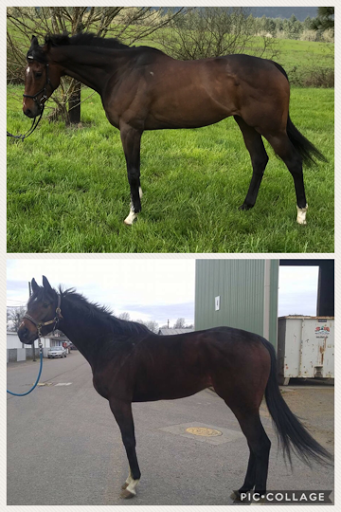 I think he is finally starting to look better to me. It's hard when you see them every day to see the long term progress but the ribs are starting to be covered! My vet even commented on how much better he looks and compared him to a swim suit model. His jumping is coming along and I can start to feel how his jump is going to be as he continues to develop. I think as the fences get bigger he will just keep getting better and better. 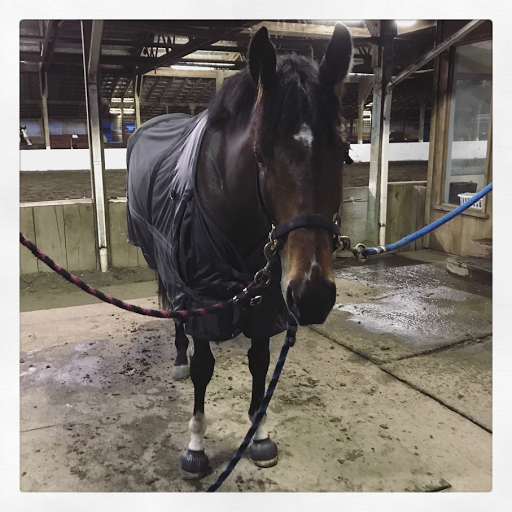 He has a busy next couple of weeks. While I am gone in Kentucky (less then a week!!) he is going to get a week of training rides. This will be the first time anyone else has ridden him. The weekend after I get back he is doing the dressage show in barn on Saturday and then going back up to DevonWood on Sunday to do the derby again. Then the following weekend we are doing the jumper show that is also held at our barn. Can't wait for all the fun to begin! And very thankful that I have him to keep me going through this summer without the Wonder Pony 😃
Posted by Unknown at 9:37 AM 3 comments:

Just when you start getting back into the swing on things something always has to go wrong. Especially with horses! Unfortunately the Wonder Pony is, yet again, on another unplanned "vacation". The diagnosis being a fractured side bone. Leave it up to my horse to 1) fracture a bone that he wasn't even born with and 2) fracture a bone that very rarely ever causes problems let alone fractures. 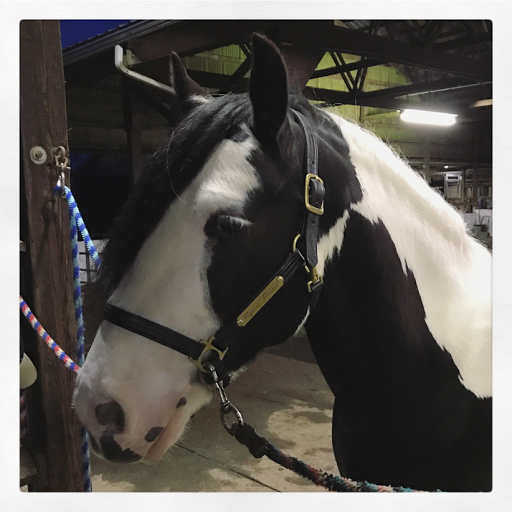 I am still waiting to hear back from my vet as to what steps we need to take and what kind of time frame we are looking at. He sent Ponys radiographs to the radiologist and is trying to track down the surgeon to get their opinions. Worst case he heads to surgery to have it removed. Best case my vet calls and tells me happy late April fools (wishful thinking right?). As of now it sounds like we have a long road ahead of us. To say I'm heart broken would be an understatement. I love this Pony more then anything and am at a loss as to why the past year has been filled with so many lameness problems. I am hoping to hear back from my vet today to get a game plan. It's looking like Baby Bentley is going to have to step up this season! 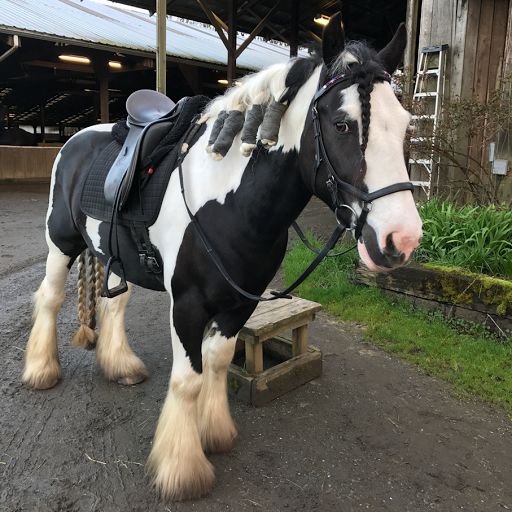 Thankfully I'm off to escape my pony problems in just over a week as I head to Rolex with some good friends 😃
Posted by Unknown at 9:53 AM 5 comments:

As I've mentioned before Bentley is a brave and game over fences but highly uneducated. I mean having jumped 5 times doesn't really make you an expert. The thing is... the dude thinks he's an expert! What we have learned about him is that he is very brave and game when he gets to do it his way (read: this includes running. Before the jump, after jumps, over the jump where ever 😂). In turn he was the equivalent of a one man wrecking ball because he would brace, run, and barely even pick up his legs. He was never out of control and he was quite pleased with himself but he would also either demolish a solid 50% of the jumps or have an awkward jump. To work on this we set some trot poles in front of the cross rail. He willingly went through but wasn't buying into doing it my way and instead had some rough approaches. After that he decided my way sucked (even though he never really did it fully my way) and if he couldn't do his way he wouldn't do it at all. Point him at a single fence and he was fine. 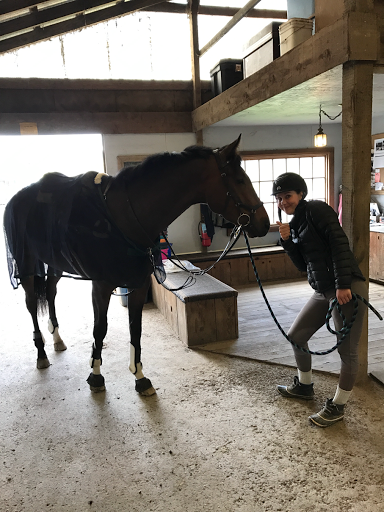 The trainers working student been tacked up for me so I could get to my lesson in time!
So this past week I spent some time doing just pole work. But he had to do the pole work my way. The goal was to keep it simple and allow him to figure out the name of the game. He was great!! 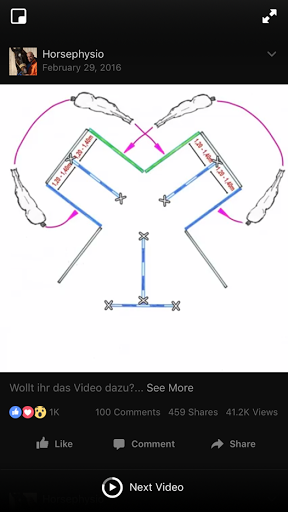 Our pole work exercise
Fast forward to our jump lesson today and we had a major break through! The trainer and I discussed our new game plan now that we know a little more how he ticks when it comes to jumping. We started off with random poles throughout the arena. With no course we just trotted and cantered around over all the poles every which way. He was super rideable and was much more aware of his legs. Then we slowly added some jumps one at a time. He was looking for the jumps, not rushing, and actually felt a little rounder in his jumping style. He even gave me a couple of lead changes on his own. He jumped around intro sized fences with everything from flowers, to picket fences, to planks with zero issues! He actually even bailed me out of a few that I didn't ride well to and instead of running out or stopping he popped right over. Once he figures out how to use his body he will be quite the jumper I think. Love him! 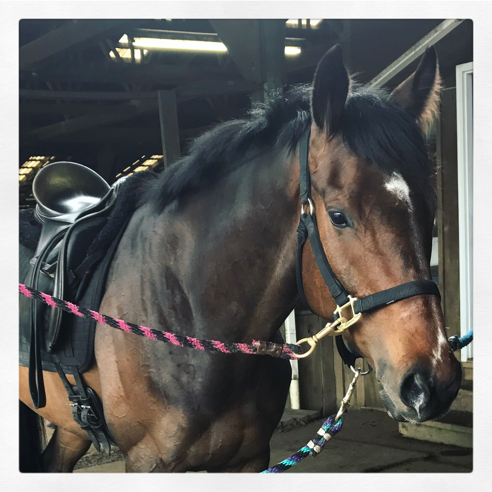