What a day, what a day

Today was definitely a day I would like to never relive again. The only saving grace of the day was a great ride on 2 great boys!

Due to part of what made today so crappy I ended up hoping on Chevy for a ride this evening after a short jump session on my boy. I havent ridden him since about 2 weeks ago and I could really tell a difference between then and now! Alanna is doing a great job with him and he is a fun boy to ride.

The pony was super also. This was our first jump since our lesson, due to some slight soundness issues which I told him is to never happen again, so I wanted to keep it short a sweet. He was much more forward which was super nice. I found out that getting him more forward will definitely help the little issues we are having. He isnt super confident over fences yet, especially with long distances, so getting him going into a nice BN xc pace really helps both of us. I can really tell when he gets into a bad distance once he is a little unsure about it the next time. He doesnt say no but he is definitely set back a little. Getting him going more, there for getting  better distances, should really help his confidence. He still really hasnt jumped much and is still figuring it out. He is getting it though and jumped great tonight!

We have another XC lesson on Monday, we are both excited!

It feels so good to be back to riding! He seems no worse for the wear and we are getting back on track. Yesterday I just took him on a walk in the field followed by 10 minutes of trot work followed by another walk in the field. He felt great in our work but I didnt want to push him too much. Today... he came out great again! Walk/trot/canter and all. Still not sure what was up but thankfully it was very minor and went away :) I told him no more of that stuff.

So back to work we go. I will flat him again tomorrow then jump Thursday to get ready for our jump lesson on Monday. Ideally I would have jumped a couple times since our last one but life gets in the way right?! We will school what we needed to work on last time on Thursday and hope to get a little improvement for our lesson at least.

I went to visit the State Fair Gypsy Show today! After a bunch of political stuff I decided we would just skip this year. Of course this is the year that all the other Oregon Gypsy Elite horses decide to come to. So of course I had to go say hi and watch. They all did great! I also found out that there will be another Gypsy show in Central Point in October! Im actually super excited that we might be going. Its nice to switch it up a little bit every once in awhile, hopefully I can make it work. 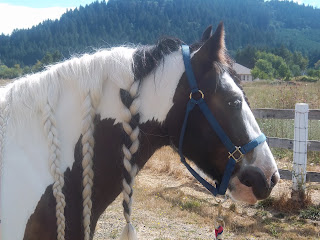 Posted by Unknown at 7:45 PM No comments:

Some GREAT and some... not so great

The great you ask? Alanna and Chevy (click here for blog) had their very first show together! They both did great and got 67% on both of their tests. I am so excited to have my show buddy back!

The downside? The pony was still lame yesterday. He stayed in his stall all day (oh the torture, I know!). I went out after the show and gave him a bath, then took him out in the field to let him graze just so he didnt think I was trying to kill him or something! After he dried off from his bath a little more I took him to the arena and put him on the lunge line. 2 circles tracking left and 1 circle tracking right at the trot and I knew he was still lame :( Originally, from being on him, I thought it was his left front however from watching him on the ground it looks like his right hind. Back legs scare me a little more. Not sure why but they do! I will give him till Monday before calling the vet. No matter how slight it is now I want to get it taken care of ASAP! In the meantime we will just go on walks and hand graze outside :)
Posted by Unknown at 9:13 AM 1 comment:

Well this is lame..

Fast forward to tonight... we are in the field thinking I am going to jump, we walk around for 10-15 minutes before trotting, pick up the trot and I trot around for awhile while I ponder if he is slightly off or if its the just field, etc. So I decide to just take him to the arena to trot him. He felt ok to the right but maybe a little off, going left however it was more obvious to me. Even then it is still slight. He is staying in tomorrow, he will get a bath and go on a long walk. Sunday he will stay in again and I will throw him on the lunge line to see how he looks. If he is getting worse I will have the vet out next week. Heres to hoping its nothing. We are supposed to have another jump lesson on the 3rd! I dont want to miss that!!
Posted by Unknown at 8:43 PM No comments:

Lots to catch up on!

And boy do we have a lot to catch up on! I have been busy house sitting and working and haven't had much computer time, just checking in on my phone.

Mostly we have just continued our work at home. Some flat work with mixed in jumping days and long walking days. It is nice to just enjoy riding your pony on a beautiful night! Yesterday, however, we headed out to Inavale for our first XC lesson with our new jumping trainer! We are going to be taking lessons twice a month along with our friends Alanna and Chevy to help get us ready to compete next year.

Mystic is getting really popular in our area now! People see him at shows and tell other people, people that know us tell other people, and before I knew it I have people coming up to me saying how they have heard about him and such! When Kelsey first came out of the barn she said "he is such a famous pony!". It actually weird to me since I see him everyday, its so normal! I sometimes forget that most people have never seen a Gypsy before.

It was a good first lesson where she got to know how we ride and how far along our horses are, etc. Mystic was really pretty good. We had some issues here and there (mostly due to my riding!) such as me letting him pop his shoulder left before or after the fences. I think it kind of took me by surprise as in our flat work we have the opposite problem where he likes to pop it right and drag me back out. We had some run outs at some fences but nothing to major and he always jumped it the next time once he figured out his mom was actually going to ride him to it. Our first run out I think I just surprised him. We were putting together a mini course and the last fence was decent size compared to what we had been jumping and I didnt prepare him for it all that well. He actually jumped it, but if the flags were there we would have taken one out :) Another run out we had was neither of our faults really. We were coming over the bridge heading towards a little red barn (jump) and a flock of birds flew out of the bushes. Right when I thought I was going to get him back from them there was a family of turkeys. I think that is the fastest I have ever felt him go!

We have some homework to do before the next lesson but I am super excited to see how much we will progress with Kelsey helping us! 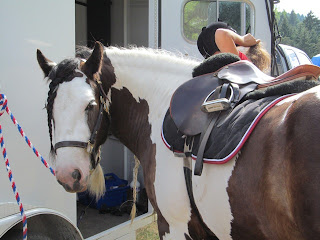 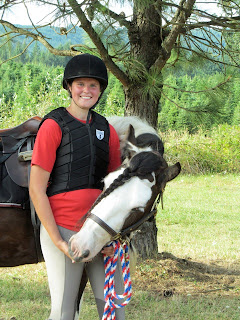 Posted by Unknown at 7:51 PM No comments:

Today was seriously the dirtiest I have EVER seen him! It was so gross. He really did a good job getting the dirt all over and deep in his coat. So he had a quick bath after our ride, I couldn't stand looking at him that way!

Our ride was ok. We kept it short since it was so hot. Im thinking that I am going to have the chiropractor out soon. He has been REALLY hard one my right rein the past 2 weeks. It is his hard side but he has never been this bad. I hadnt really thought of him maybe being out until Alanna said something tonight and I though wow that actually might be true. Especially since we have just started jumping more in the past 2 weeks. I feel bad pushing him if it is an issue related to him being out. It doesnt seem like he is in pain but it was just a sudden drastic change that doesnt really make any sense otherwise.

We are hoping to start some semi private jump lessons with Alanna and Chevy at Inavale with Kelsey which should be SUPER fun! I cannot wait to get eventing. I have waited so long to have a horse like him!
Posted by Unknown at 6:22 PM 1 comment:

Its hard to believe how fast time goes by. 5 years ago today my man was born! Its been a crazy fun journey so far and I am SO thankful to have had the opportunity to be able to call him mine. Now if only he could stay 5 forever!

This is the age we have been waiting for since I got him! We can now start thinking more eventing and preparing for our first recognized event next year. We really havent jumped that much so we can start getting more of that in too. We are starting lessons with an eventing trainer out at Inavale and Alanna and I will be taking a semi private XC lesson once a month until the weather gets bad (then we will just do stadium fences).

So our rough plan as of now (dont you hate growing up and having to be a big boy?!):
- Start jump lessons (and continue flat lessons)
- Take some clinics
- Get out to some derbys and/or one days
- Compete at Aspen early season next year before Inavale, then compete at Inavale also!

I cant wait to start doing some big boy stuff with him now that he is officially not a baby anymore. A happy and sad moment for sure! 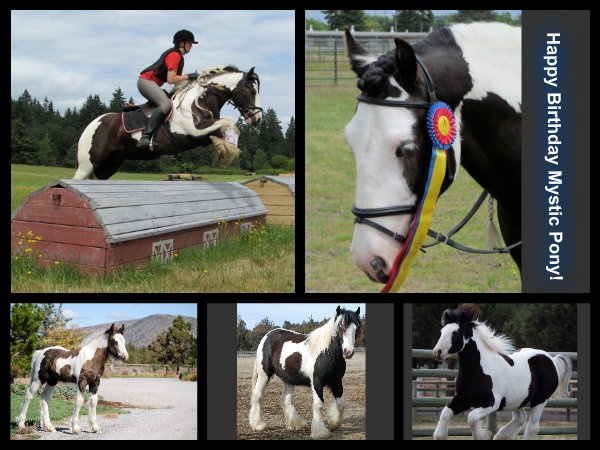 At our beautiful barn that is! They mowed a little part of the field where our jumps because the grass grew back so fast! We had a great ride last night! 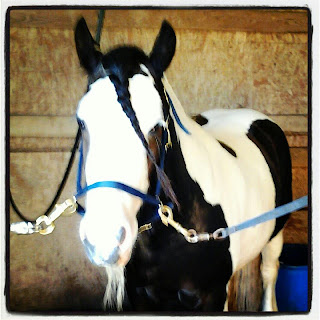 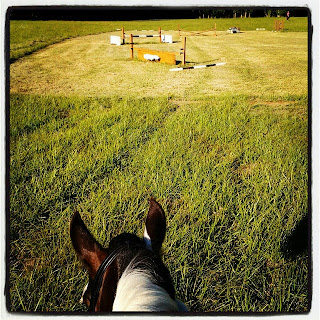 Posted by Unknown at 7:25 AM No comments: