That about sums up Tolo under saddle. Although our rides seems to get better and better (slightly) by the end of each ride they all start out the same no matter what I do. He is quite anxious in the bridle and resistant to reach into it. He lunges in side reins nicely and reaches into the contact then, lets me get on and walk him around on the buckle with his head down but the minute I go to pick up my reins his inner llama comes out. Obviously it is rider related and he is very untrusting of his riders hands. I tried flexing him inside and outside, moving his body around a little, etc but he gets pretty anxious about it. As the ride progresses he relaxes more and more. After some trot/canter work I can go back to the walk and work on all the basic stuff that I am not able to in the beginning. Tomorrow I am going to try just going into work without 'fussing' with him first and go back to where I would normally start a ride on Mystic after I get him loosened up and reaching more into the bit instead of sucking back away from it. We actually got some really nice trot work tonight and improved canter work. His canter really doesnt feel good. He sucks back so much in the bridle which transfers to him feeling like he is trying to canter in place. I cant read what he is thinking and therefore have no idea if he is just really worried about getting banged in the mouth or if he is about to blow! Many, many trot to canter transitions and pushing him more forward in the canter helped a bunch and we got our best canter work this week tonight. It was short lived (just a few strides here and there) but its nice to be making progress. He also had the last 2 days off so overall it was a decent ride. 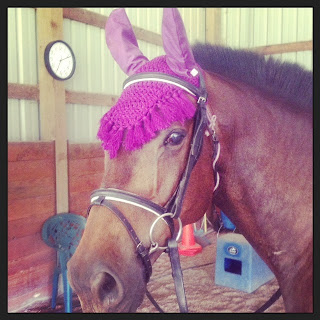 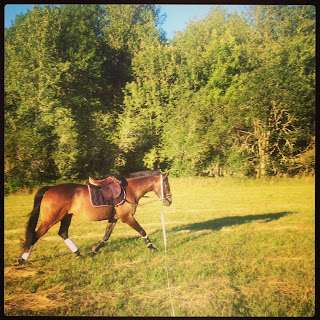 I know all our under saddle problems are not related to his blindness. On the ground he is an angel! Totally like he was before I sold him. Our BO was telling me tonight how much they (her husband and her) like him and how nice of a horse he is. He has found some friend in the herd and is totally settled in! On another positive note he is feeling more and more 'regular' under saddle. He felt slightly uneven when I first moved him but I thought I would just keep up the light work and see what happens and he is definitely feeling better! He wasnt ever anything that I would consider lame just a little uneven.  I think the combination of getting his shoes on and going back into work have helped.

Mystic pony has been great also! We had a nice bridleless ride earlier this week which we havent done in a long time and of course he was his perfect self :) I am hoping to take him to a breed show at the state fair in August and if I can then we will do a bridleless musical freestyle there! Tuesday we had a rather rough dressage ride but had a nice trail ride in the hills with Alanna and Gator Dude on Wednesday. He had Thursday and today off (having 2 horses to work after working a 10 hour day is not fun! Especially on Friday!) and today but will go back to work tomorrow along with getting his hair did. It looks awful right now. Pretty sure I havent done it since Inavale... Whoops!
Posted by Unknown at 9:17 PM