Mystic has had quite the R and R this week post State Fair. Mostly because I needed to be working Tolo (someone came to try him today) and I had not fully recovered from the show and was exhausted all week after work! It was hard enough to ride one there was no way 2 was happening! Yesterday I finally rode both boys. I put the jumps down and had a nice short jump school with both of them. Of course they were both awesome! 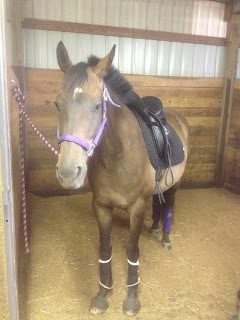 Tolo had a potential leaser come out today and he was a total star. Just plunked around at the walk/trot/canter like a little lesson horse. Hopefully they are interested in leasing him! It would be so nice to only have a one horse bill instead of 2! Fingers crossed!