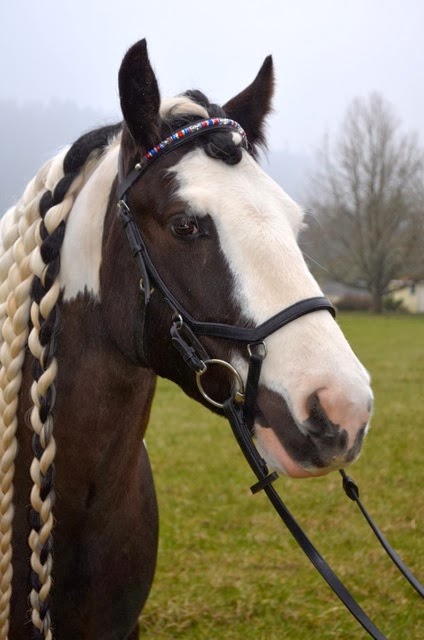 You can never be 'on top of the world' too long when you have horses, as you all know. Pony has been working really nicely and we have continued to have great rides all week! Sadly that ended today :/ I headed out earlier today to spend the morning doing a little hair care and was greeted by the barn owner saying how thankful she is for Mystic. She went on to tell me that she turned her horse (a 2 year old who when they turned him out in the big boys pasture last time got ran around until they put him in another pasture and called it quits) out with the big boys today, who are quite naughty and try to pick on Pony also, and one of the head honchos started making a beeline for her horse. Shockingly, to everyone as Pony is the total low man out there, Pony full on galloped to get between the mean horse and the 2 year pushed the 2 year old out of the way and proceeded to chase the mean horse away. The mean horse is very persistent and kept trying to get to the 2 year old but everytime Pony would fly backwards hooves flying to protect the youngster, how cute is that?! Mystic doesnt do as much as lift a hoof when they pick on him, but instead just tries to get away from them, and they had found their nice happy place where they were not bugging him as much but they must have really ticked him off this morning! Go Pony!

Sadly as I went to get on him this morning we knew something was wrong immediately. Right when I got on and asked him to walk he gave 2 little 'bucks' and clearly was not happy. We continued to walk on a long rein but he just didnt feel normal, nothing super obvious but he just wasnt happy and both Alanna and I could tell he was not comfortable. I hopped off, took his tack off, and through him on the lunge line to have a look. We both saw some weirdness in his hind end but couldnt pin point which hind it was. It definitely looked like something up higher rather than lower. Obviously I didnt work him but instead just walked him around on the ground for a little bit. I am really hoping he just pulled something while protecting Pants out in the pasture as it is muddy and he could have easily slipped. I tucked him in his stall with some hay, put some Sore No More on his hind end, and gave him some bute. Of course this would all happen the week after getting accepted to the Expo and sending in my show entry... fingers crossed for a quick recovery! Trying not to panic just yet!

We also got some conformation pictures today for my school project. These urine stains are the bane of my existence. Alanna found a potential fix online so that is on our list of things to try. Worst case I will resort to using the while horse spray paint stuff at shows until it goes away. 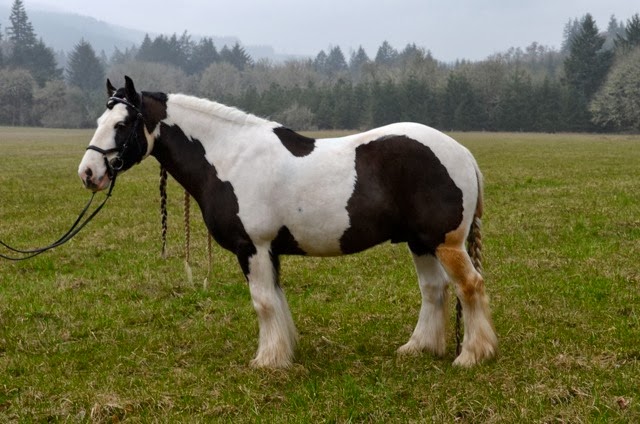 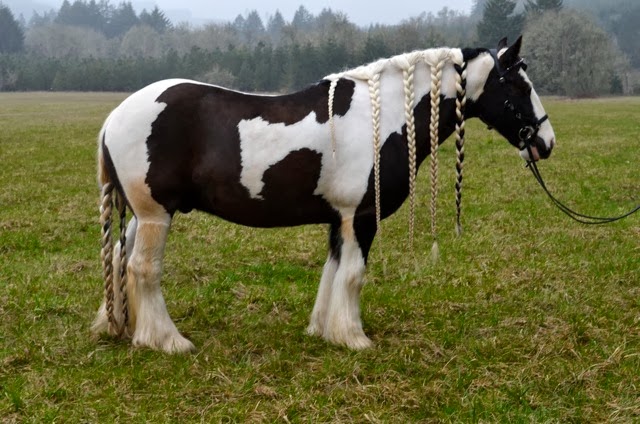 Pony is looking C.H.U.B.B.Y. Whoops! He actually is (or was) getting better and has been back into harder work until today. Also I am on the hunt for a new dressage girth as all the sudden he has a rub on one side under the girth area. I found a really nice one that is 50% off but still has a price tag of $75. Pony is a wreck right now! Doesnt he know that he has already spent all my money between show fees, membership fees, and tack so we are ready to show?!
Posted by Unknown at 2:44 PM