A Weekend of Firsts

What a weekend! It was full of a bunch of firsts for us including some first places, but more importantly (I mean I was the only one in the jr/yr division) it was my first time riding at DevonWood, both Pony and my first recognized, our first time doing 2nd level, and I just thought of this but it was also our first weekend long dressage show. That is a lot of firsts for one weekend! This is going to be a long one so I will try to break it up with pictures :)


We hauled the ponies up Friday early afternoon and both quickly settled in. After getting slightly organized we tacked up and went for our first ride. As a warm up I decided to walk him around the property. For those unfamiliar, DevonWood has 5 outdoor arenas with walking paths all around them all and the view includes mountains, trees, and the gorgeous barn. Just simply being on my own horse walking around that property, with that view you see above, was a dream come true for me! Seeing all the big fancy upper level horses and actually realizing I was at a recognized event started setting in and I definitely let it all get to our ride. It wasnt awful but it wasnt anything close to what we can do. The good part was that we got to ride in the indoor, where we had to ride both our Saturday tests, and our ride was in no way a reflection of how he was being. He was cool as a cucumber, as usual, and after untacking he got his dinner and tucked in for the night. 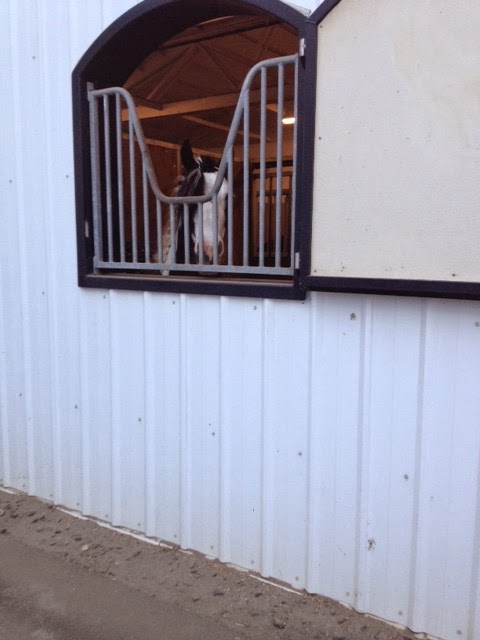 Saturday morning we started out with first level test 3 (they dont really run anything in order). He warmed up really well but I was definitely super thankful to have Mary there to warm us up. I tend to, like many others who have putzed around the lower levels, get into my test and stop actively riding my horse. Who would have thought that if you keep riding your horse your ride gets better?! The last minute advise was to not be afraid to really lift up on my inside rein and get him bending around my leg. We headed down the centerline, turned left at C, headed for the diagonal for our trot lengthening, and boom the best one I have ever felt from him! So springy and powerful, keep in mind he is a fat Gypsy so it isnt anything spectacular still, and the rest was smooth sailing from there. It wasnt a perfect test and I didnt ride him super well but it was a solid test and earned us 65.96 %. It was easily our best first level test ever and I was slightly disappointed with the score but I just needed to tell myself that the judging is MUCH tougher than anything we have been faced with and out of 12 or so horses in the class (if it was not split into divisions) we were in a 3 way tie for 2nd but we got ourself a blue ribbon because of the division split :) A huge thank you goes out to Alanna for always showing up and cheering us on even when we are an hour and a half away! She is the best when it comes to helping me get ready (like when I have had all morning but still end up not getting ready soon enough and end up rushing to get on!), keeping me relaxed, and taking the best pictures. Good horsey friends are seriously priceless and there is no way half the shows I have gone to would have gone as smoothly if she wasnt there!
We rode our first test just after 11 am and then had a nice 6 hour break before we had to ride first level test 2 just before 6 pm which gave him a nice rest and he got to visit his favorite part of DevonWood, which was the grazing area that had foot tall green grass to eat. I literally had to drag him away from that area the entire weekend and he tried dragging me to it during every walk! Going into our second test we knew we needed as little warm up as possible and I hoped on him 25 minutes before my ride time and had a nice walking warm up. Sadly what was supposed to be 25 minutes until my ride time ended up being about 40-45 minutes until my ride time. Tired Pony + extra 20 unneeded minutes under saddle = really lazy/tired pony. The long day definitely took its toll on both of us and I didnt pull my weight as much as I should have. I began tickling him with my whip throughout beginning of the test which helped but since I havent ever really used it in a test I forgot about it towards the end. Something that I need to keep working on as he responds very well to it. That being said it was still a respectable test, under a more stingy judge, and got us a 64 %.  Considering that not one single horse broke into the 70s that day I think we held our own against the big boys! One thing that I was also proud of was that on our collective marks, for both tests, I scored a 7 on riders position and on harmony between rider and horse! He is just so consistent and reliable but really needs my help to get him carrying himself and if I dont show up to really ride he doesnt get the ride he needs.

With day 1 under our belts, along with our first level scores needed for our bronze medal since they were under two different judges, we only had to focus on one test for today which was our second level test. Thankfully we didnt do first level today because they started out the day, beginning at 7:30am, and I was so glad I didnt have to get up any earlier! Our test was not until 2:12 so I had time to help/watch Mary along with re wash Pony and take him on a few "here have some more energy" grazing walks. I hopped on at 1:40 and we just walked around for 10-15 minutes before picking him up and really getting him to work right away. I tend to let him talk me into less demanding work so it was nice to finally have Mary with me so she could help coach me through a shorter yet more effective warm up. Our parting words were to a) still dont be afraid of lifting my inside rein b) dont be afraid to tickle him with my whip, especially in the mediums and c) if he gets heavy push him forward do not pull him back. That was, by FAR, the best ride I have ever given him in a test. I had some errors here and there, as far as the geometry of the test and letting up to early in our mediums, but we didnt completely blow anything just had a few not as great moments (such as one of our shoulder ins that I didnt get him into very well so it took about half way through for me to get it back... hello 5.5). I was THRILLED from the moment I saluted at G at the end of the test. He was spot on for the ride I gave him and all of the little mistakes were completely my fault. 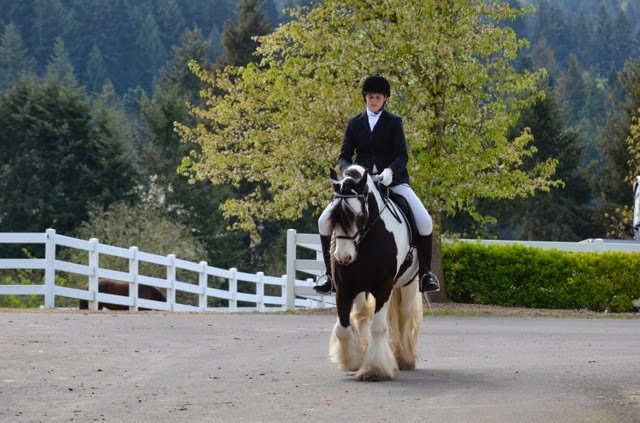 So what does a fat black and white pony score at 2nd level? 64.4% of course :) Out of the 8 riders we tied for 3rd, but ultimately got 4th because ties are broke by your collective marks (aka: our 6 for impulsion). What a good Pony! We actually got quite a few 7s including our walks (both medium and free), both our simple changes, a counter canter serpentine, collected canter circles, our centerline, and for our collective marks in both rider position and harmony. Not to shabby for our first time! Nothing new but we just need to keep chipping away at improving our mediums, especially at the trot. The good part is that I feel like we actually improved some of our work over the weekend and found ways to begin improving it also. Now we have a month to get back to work to hopefully do even better at Heart of the Valley in May! Overall I could not be happier with how this weekend went and Pony earned himself a couple days off, he was one exhausted pony tonight!  I will try to write more about the non-show aspect of the show such as peoples comments and thoughts about him later. For now, I am off to bed! 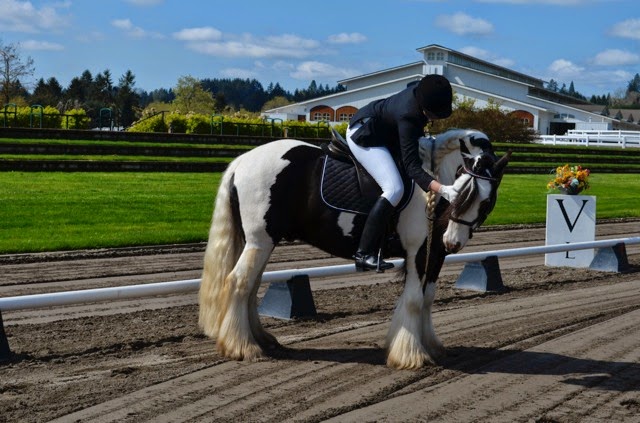