It must run in the family 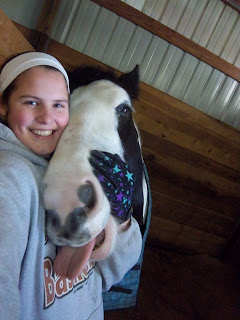 I thought it was just my human family that was a little off the rocker but seems like it is everywhere! He was having quite the time either making faces for the camera or trying to eat it! Hes got personality thats for sure!
He sure knows how to make you laugh!!
I think Tuesday im going to start putting him back outside on pasture. He will be SO happy. It has been 2 months since he did it and his mouth has been healing super well. It looks almost completely normal now! I let him graze for a little bit on Friday after I washed his tail and his legs, since it was a decent sunny day and he is super duper gross. He has been doing really good for being on stall rest though. Im thinking he might have a little less energy for our rides once he gets to go outside again but maybe he will have a little better half halt :)

On another note... my birthday is on Wednesday and since we have tomorrow off from work my mom, best friend Alanna, and I are headed up to Portland Meadows to watch some TB racing (as long as the roads are not to bad from the snow)! I am SO excited! I have been before but it was a long time ago with my Pony Club. Recently I have really decided that a goal I have is to eventually start a OTTB rescue so I can give horses who owners dont want them anymore a safe place until new homes can be found. That way they dont "have" (not that I believe they ever really have to) to resort to sending them to auction/slaughter. Im super excited to make it out there again!
Posted by Unknown at 3:13 PM