I havent had to much to write about in the last week but I did forget to put up some pictures we got on Sunday! 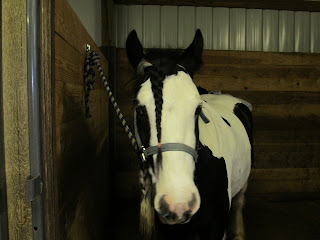 No going to lie, I slacked a lot this week. Saturday I went up to Porland (after a less then steller ride on Friday which is very abnormal) to celebrate my birthday with my dad so he had that day off as I left at 6am and got back at almost midnight. Sunday he was GREAT! I think that he was really tired, maybe a little sore too, from Thursday when Teacher Mary rode him. So we talked about maybe giving him Fridays off on the weeks that she rides him. I was super happy with how he was on Sunday! On Monday I didnt ride I just went out and played with him and turned him out for the first time since the beginning of February! He was so happy even though another gelding in his field picks on him :( Im not sure why he just doesnt give him a good ole kick but he wont. So the horse pulls his blanket, chases him around, grabs his tail and pulls on it, etc while Mystic is just trying to graze! Tuesday I do barn chores at a barn I work at, ride a horses there and ride Rheiny (Teacher Marys horse!). I know, not an excuse since I dont have school, just work, that day but after playing with Sky also I just didnt want to stay at the barn till 9 at night. Yesterday I had to bring horses in at NDF so I went early and just lunged Mystic in side reins for about 35 minutes and then walked him down the road. He is so gross now that he gets turnout because the pastures are just muddy messes with all the rain but he sure doesnt care!
Today Teacher Mary was going to ride him again but got caught up in work so instead were going to have a lesson on Saturday! Im glad, I think I really need it. It will be nice now that she has ridden him more so she can help tell me what Im doing wrong. She is also going to hop on him for the first part of our lesson too :) It will be nice, after all we are down to like 5 weeks until our first dressage show! And we found out that the qualifying season is a whole month shorter than we thought which takes out a show. I think we will be fine but the pressure is really on now!
Posted by Unknown at 9:47 AM