It is so strange (in a good way!) to be back down to one horse. Even though they were both at the same place it still doubles your time/energy/money/etc to have two. In the end I feel like both horses started getting the short end of the stick, in terms of riding time and frequency, once school hit and it started getting cold and dark earlier. It was nice to be able to go out after work today (besides the fact that it was the first night where I got off work and it was already pitch black...) and spend on my time on Pony without feeling guilty!

I was thinking tonight as I was riding him how far he has come! Even just at the start of this year when we were schooling the more 'basic' (I use this term lightly because lets face it... nothing about 2nd level is basic!) elements of 2nd level and even though he scored a 63 % he was still a very green 2nd level pony. Not to say we are ready to go show 2nd test 3, as we havent started schooling some of the movement yet, but I feel as if we could put in a solid 2nd test 1. As I was moving him from shoulder in to haunches in on the circle thinking "wow this is pretty easy" I couldnt help but smile and think about all the people that would NEVER even think we would be doing this! Even though we didnt show as much this year I still feel like we have accomplished so much! I am very excited to take more lessons this winter and get onto an every other week lesson schedule. Time for Pony to shed the pounds again (another aspect that I had let slip a little with having 2 horses!) and buckle down so we can maybe be a little bit competitive in the show ring next year?! 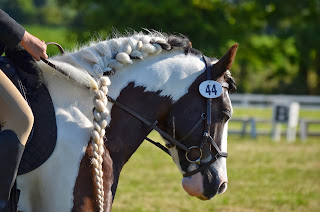