This is not horse related but I got to bring my puppy home from the vet today! He has TPLO surgery yesterday (kind of like acl for people). It was 50% torn on the same leg he had his full hip replaced! Its a good thing he is so darn cute because he is turning into our million dollar bionic dog! I was really worried about him. He got SO scared when we went in for a consult, I couldnt imagine leaving him overnight but they said he was super good. They could definitely tell he was really scared the whole time though and saw how happy he was when I came to pick him up. The incision looks super gross but he is already using it pretty well considering! He also isnt trying to bite or lick at it. I am keeping his cone head on except for taking him outside or if I am watching him close but he hasnt tried at all. Thankfully his doctor said he didnt have to stay in his xpen all day because he really doesnt like being in it with his cone on, its like a couble whammy for him. So I let him out as long as he lays down and he lays by my feet :) I never thought I would be so nervous leaving him for surgery, I almost cried when I left him there! I had to tell myself "Tarra this is a specialist he does this everyday and he has already been through a hip surgery, he will be fine!" It didnt help much but once I got the call that he was out of surgery I was ok. I was MUCH better once he was home though :) I bought him some sympathy bones today to suck up to him LOL! 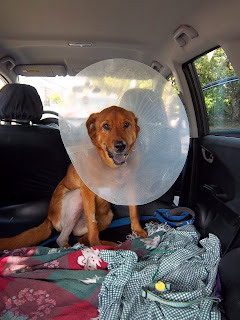