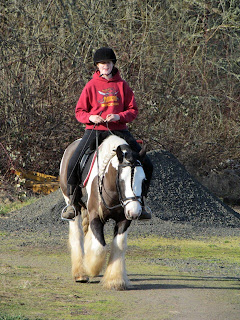 We have had a gorgeous last couple of days here!! Like the ponies have been naked and soaking up the sun! Oregon cant fool me though, I know its just the calm before the storm (the next storm atleast, already had the major flooding)! At least it has been nice while it has lasted!
Mystic pony had some Teacher Mary time on Thursday and I got great reports that he was awesome for her! We worked really hard on thing from our lesson, such as controlling his right shoulder while tracking left, and she said she could tell he was getting it! I think he is really growing on her, she was telling me how hard of a worker and how fun he is :) Then Friday I took him up on the trails and we did just a little bit of conditioning on the hills, not much since we havent been up there in awhile but enough to get him going a little. On our way back to the barn we met up with Stephanie and Rhythm who were making there way up the hill! Then he got Saturday off in his pasture. Today he is back to work!

Yesterday I took Sky over to the arena. I tacked her up and threw her on the lunge line after some walking and trotted her a couple circles total each way (its a lot of work for a girl thats so out of shape!) then decided I would just hop on her. So I got on and we just did about 20 minutes of walking. I have watched some of the videos from the Retired Race Horse challenge going on right now and so I tried to do a little bit of what I saw in those videos with her. Although im sure im not doing it quite as well as the professionals she still did put up a good fight but by the end I got her much more relaxed and stretching her neck down instead of putting her head in my lap (clearly a race horse thing but super annoying!). I always forget how hard it is to go from Mystic to Sky. I forget that she doesnt move up my leg that well and doesnt understand all the things that Mystic does. She got much better by the end though and was even kind of getting the whole moving off my leg. She was pooped after that, im sure both physically but even more mentally. She is so cute when she is all tired. She basically puts her head in your arms and just falls asleep!
What good ponies I have!
Posted by Unknown at 10:33 AM