Since Tolo has been so good the last few times I have been with him as far as catching him and all (first couple times were iffy and he wasnt relaxed about it at all) I decided that he could have some fun outside today. My big concerns were that 1) he hasnt been on turnout at all since summer  2) if he got scared out there I am not sure what his reaction would be and 3) if he wouldnt let me catch him in his stall there is NO way he would let me outside!

Since my 3rd worry has gotten a ton better so quickly (he is following me around, stands not tied while I brush and blanket him, etc) I figured the other two will have to be discovered at some point. Better that he gets out to be a horse sooner rather then later. I have been hand grazing him and he seems very at ease and focused on eating when I do so I had a little bit of hope that maybe all the grass would just distract him right? Yeah.. wishful thinking!

As I walked him through the gate he was spinning around running backwards, trying to take off running, etc. Like a kid on Christmas that knew what was coming but could hardly contain themselves from the excitement! So much that whenever I went to unlatch his halter he exploded again. Seeing this I opted to leave his halter on. That way if something happened I could get him easier and I could get out of dodge from flying hooves easier once I let him go. Normally I would not allow this kind of behavior but given the circumstances I was much more lenient. He was so extremely happy to be free and ran around between grabbing some grass. 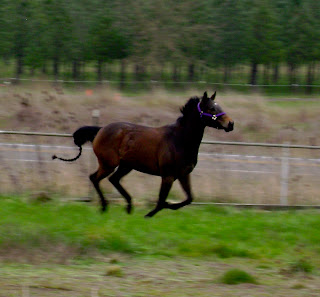 One thing that was very obvious to me (and even my mom) was that he is definitely funky in his hind end. A chiropractor is in his near future for sure. It is hard to explain but he just looked all sorts of out of whack back there. 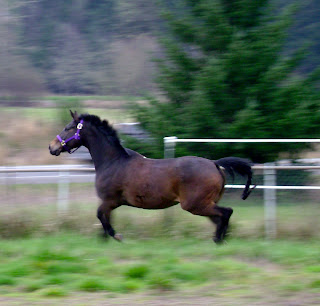 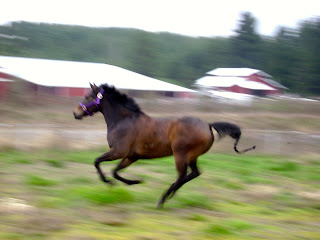 Running and running and running! I was kind of worried with not being able to see out of his left eye if it would effect him running around out there but you never would have known by just watching him! Finally he settled down and his happily grazing as I type. 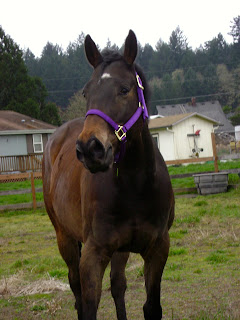 Poor Mystic is getting the shaft on his own blog! I am heading out to see him shortly and I think we are going on a walk outside. Ill be sure to get some pictures of him too :)