The dangers of tack sales!

Alanna and I headed out for the Canby tack sale bright and early at 5 15 this morning. We got a booth and took a bunch of tack from our barn to sell along with a bunch of Alannas stuff. Since getting Tolo back I only had a shopping list, a very dangerous thing! Aside from us getting an outside booth that got rained on for a good hour (and got all the wind) we did really well and sold over $1000 in tack!

Since it is mostly western people that get booths there isnt normally much in terms of english tack but I did get a couple scores (I sent Alanna out to scout out the deals for me haha)! I got 4 saddle pads for 6 bucks total, a black w/white piping dressage bridle for Tolo for $25, a new Toklat fleece dressage girth for $10, and new black reins (since our beach incident where my favorite ones broke). I looked for a thicker dressage noseband for the pony but the only one they had wasnt a good deal. And if im going to pay that much I might as well get a new one! 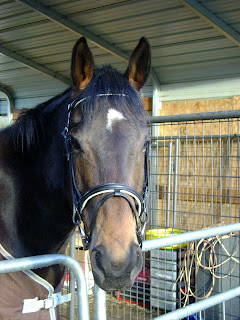 Yesterday Mystic and I had super fun ride.... up until he dumped me haha! With the expo on Thursday I decided to pop him over some fences bareback since we are planning on doing it all bareback. I also threw on his bridleless neck rope in case he was feeling food enough to take him for a bridleless spin over fences. I set up a little cross rail and like a 2'3" oxer. He was a total star! So off came the bridle. He was totally driving to the fences and didnt even attempt to run out. I would give him the slightest inclination that we were going to the fence and he would totally take over and go right to it. Tight roll back type turns and everything. After a few times over the cross rail we popped right over the oxen no big deal! So here I am thinking dang.... this horse is a stud (which he is of course)! The next time over the oxer I try putting my hand out to the side. Apparently that translates to a Gypsy eating monster and he took off bucking after the landing.... yee haw! Needless to say I have a pretty swollen and sore leg. I did however get back on (still bridle less!) and jump him over it all again with NO issues what so ever. So lesson learned on my part. No hands to the side LOL. After I got up off the ground he walked right up to me and put his head on my chest, its was the most adorable thing ever. Now for my leg to get better for my riding final on Monday and the expo on Thursday!
Posted by Unknown at 8:25 PM