I am about as competitive of a person as you can get and if were being honest who doesnt LOVE winning?! Years ago if I didnt make it into the finals (which we didn't) I would have left mad but last night I left with so much more!

We sadly didnt make it into the finals (which we knew we wouldn't once we saw that crazy course!). It was tough competition, he was the youngest horse to make it into the semis, and the course was all about scary objects. Since it is only the second year of the challenge here they are still changing it around and sadly it was much different then it was last year. Mystic is the type of horse that would have thrived much more in last years competition as it was more on the horses training, different skills, and speed versus this year which was all about scary obstacles.

With that being said he showed me that he could pony up and do the scary stuff too! After walking the course I honestly thought we would complete two of the obstacles. I know the things that he is really scared of and there was about everything you could imagine all in one course LOL! Including a teeter totter bridge, a large hula hoop with streamer things hanging off it that you had to walk your horse through, hitting a ball into a garbage can with a broom, throwing a rope, walking and backing a spiral in white gaming chalk, and picking up one end of a pole and completing a circle around it while keeping the other end in a circle on the ground. He does NOT  like me holding things on him (as you can see with his round one video when I got the hula hoop!). Something about it just really freaks him out and he genuinely thinks he is going to die! So the fact that I had to hold a broom and hit a small ball, hold a pole and circle around it, and throw a rope gave us no hope, so I thought.

So of course what does he do? He walks right on the teeter totter bridge (got a little nervous once it went down and thought he couldnt get off but nothing bad!), walked right up to the scary large hula hoop where I let him sniff and look at it for a little bit before he scooted his way through, grabbed the broom as he went sideways a little before I got him back to the ball where I hit it into the can, walked right through the chalk that he swore was going to eat him just a year or so ago in OHSET, jumped away from the pole at first but then did his circle, and only jumped a little as I chucked the rope of of him (cant throw one worth crap so I just threw the whole thing haha)! I think I was in shock the whole course as he continued to do everything I asked of him (well.. except for the sidepassing over the hay bales which we had to do again. Or not do I should say :) ) even if he was nervous or scared. Then after finishing the course all 10 of us had to go back in the arena where the crowds were screaming, stomping, yelling, etc and he couldnt have cared less about it all. He just really wanted to visit with the horse beside him! Here is a sneak peak of some pictures and round one video. Round 2 and more pictures to come! 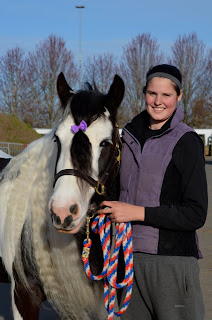 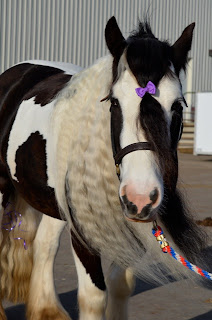 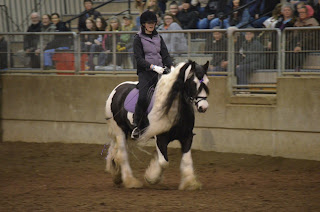