No backing out now

It is official.... our entry for our first recognized 3 day has been SENT IN! Both a feeling of extreme excitement and also that feeling of what did I just do!

Im sure the next 3 weeks are going to fly by. Pony gets to be a super dressage pony on Monday for a training ride. Im hoping to get some video on my phone, we will see how that works out! Then I plan on doing some hill work once a week (maybe even twice), 2 dressage days, one jump day, and one lighter fun day.

Today was our jumping day! Of course I finished setting up fences and was all ready to ride when I realized I must have left my breeches at home (had to do barn chores first so I wore other pants so I didnt have to ride in wet breeches!). I was not going to let all my hard work to waste so I did the next best unsafe thing, besides trying to jump him bareback over scary fences, and just rode in my jeans an bogs. The worst part about it was that I have a rub on the inside of one of my legs and it was not the most pleasant feeling having it rub against my jeans/stirrup leather. I did notice how much more effort I put into keeping my legs nice and secure, funny how that works! 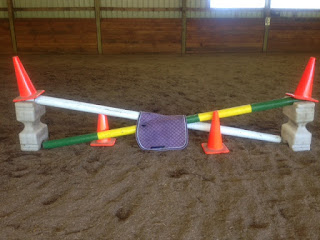 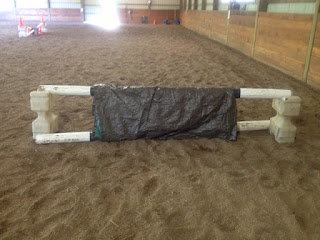 I dressed up the fences and made them more scary than he is used to. Inavale is known for having really fun and dressed up stadium fences. The have huge teddy bears, wood cabins, a piano fence, a Kerrits fence, etc. Will make for super cute pictures but also a big eyed pony. He looked hard at the cross rail the first time I brought him to it and thought about stopping. Instead he broke to a walk and I just made him walk over it. That way it wasnt a big issues but he knew he had to go over it. From there on he was great! He looked at both the other ones with tarps but popped right over them with some encouragement. I was super pleased with how he handled it all.

After we were done I walked him down the road to cool him out (its been in the 80s!). Not that you guys want to see a picture of my horses poop but he is so strange! He never poops under saddle (for the most part) but he has to every.single.time we get to this one spot on our walk. Its so weird!